To mourn the end of summer, my friend Corey and I decided to have one last barbecue for the year. It was really just an excuse to play Will Smith’s “Summertime.”

It was necessary to have our party at Corey’s house, because I’m pretty sure it would have been a bad idea to hold the party on my fire escape—the only outdoor space I’m allotted at my tiny apartment. We clung to the hope that we’d have at least one last day of heat for our bash, but instead we got chilly air and leaves in various shades of autumn.

The theme to the farewell feast was food that is super easy to make but tastes like it took hours to prepare. I picked up some vegan Boca burgers and marinated them in Stubb’s Mopping Sauce Bar-B-Q Baste for 30 minutes. We cooked the burgers and thick onion slices directly on the grill, along with sliced mushrooms stuffed into foil packets. To give the burgers an extra-smoky taste, we toasted the buns right on the grill. 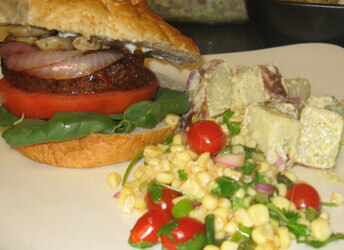 Two of the many side items were Jalapeño-Corn Salad and Red Potato Salad. Both stuck with our “fast summer feast loaded with flavor” theme. The corn salad has a little kick, and if you’re a fan of the heat—as I am—add another jalapeño or keep the seeds in.

Our barbecue was a hit—not quite as exciting as Will’s, but still fun—and the perfect way to say goodbye to “summer, summer, summertime.”