Update: PETA President Ingrid Newkirk traveled to dairy capital Madison, Wisconsin, to present vegan cheese company Treeline Treenut Cheese with a Compassionate Business Award. Big Dairy is on its way out, and Treeline understands the ethos behind this seismic shift. On making cashew-based cheese, the company explains, “We [humans] alone persist in drinking milk into adulthood, and the milk of another species to boot. This unnatural diet takes its toll on our health.” Addressing the suffering of cows, the company says, “Today, dairy cows suffer terribly in giant factory farms and milking sheds, where they are sapped of their milk, their strength and their dignity. Every year, every dairy cow must give birth to a calf and every year that calf is taken away.” We couldn’t be happier that compassionate companies like Treeline are stocking store shelves with their products, and we look forward to watching their continued growth and success. 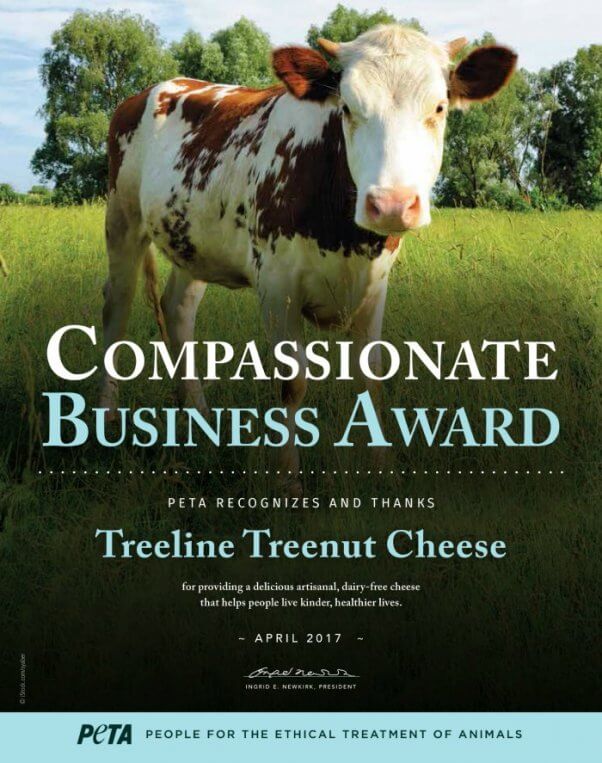 Getting it ready for you…#dcvegfest15

The expansion is planned for September. (Yip!) Currently, the cashew-based cheese is sold at Whole Foods Market, Natural Grocers, and MOM’s Organic Markets.

Treeline Treenut Cheese flavors include Chipotle-Serrano Pepper, Scallion, Green Peppercorn, Herb-Garlic, Classic, and Cracked Pepper. Which will be your favorite?

Have you been thinking about going vegan? Our FREE Vegan Starter Kit can help you out! Order one today: