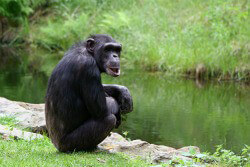 Most of us who’ve been fortunate enough to have a close relationship with a cat, a dog, or another animal have learned that the better you get to know an animal, the more the perceived differences between you and the animal seem to melt away. Now, scientists at the University of St. Andrews in Scotland have collected proof that chimpanzees take into account what other chimpanzees know—or don’t know—before they “speak.”

In a recent study, the St. Andrews team planted lifelike plastic snakes along a path commonly used by a free-living troupe of chimpanzees. The snakes were models of species indigenous to the area and known for their fatal bites. The observers noticed that when a solitary chimpanzee spotted one of the plastic snakes, she would quickly jump back and avoid contact. But when two or more chimpanzees came upon a snake and the chimpanzee who spotted the snake realized that another animal nearby had not, the first chimpanzee would utter a “hoo” sound, calling the unaware animal’s attention to the deadly threat. In other words, the warning sound made by the first chimpanzee wasn’t a knee-jerk reaction to the threat but instead a voluntary vocalization made only after ascertaining whether the second chimpanzee was aware or unaware of the danger. The study showed that chimpanzees—like humans—take into account their audience before “speaking.”

The conclusion of the study—which was reached after repeated observations—is being touted as a major breakthrough that gives scientists insight into one of the factors that contributed to the beginning of complex communication. As one of the scientists involved in the study stated, “It’s one of the things that’s been missing from the evolution of language story.” Another scientist, aware of the study but not involved in it, remarked, “It appears that humans aren’t quite so unique, after all.”

We’ll second that—especially when it comes to humans’ and other animals’ capacity to feel pain, pleasure, fear, loneliness, and concern for others. That’s why it came as welcome news when the National Institutes of Health (NIH) recently announced that it was suspending funding for any new experiments on chimpanzees. The historic announcement came after PETA and others testified against the use of chimpanzees in laboratory experiments at a hearing held by a committee of the National Academy of Sciences’ Institute of Medicine (IOM). In its report, which was commissioned by the NIH, the IOM concluded that “most current biomedical research use of chimpanzees is not necessary .” This decision could mean an immediate reduction and the eventual elimination of experiments on these highly intelligent and sensitive animals.

Observations of animals behaving “like humans” abound: Geese grieve after losing a mate or eggs, elephants mourn the loss of a beloved member of the herd, fish and even wasps use tools, dolphins will come to rescue of others in danger … and the list goes on. As more and more proof of the striking similarities between humans and nonhuman animals becomes available, maybe society will stop treating animals like unfeeling objects and begin to show them the respect and kindness that they deserve.