Some people are cringing while others are cheering because football season is here again. Tonight is the NFL’s season opener, and how can you watch football without a greasy, deep-fried, cheezy snack in your hand?

Last year I featured Game Day Potato Skins, which were topped with melted vegan cheese and soy bacon pieces, but this year I’m going to spice it up a bit with Hot! Hot! Hot! Jalapeño Poppers.

As I mentioned earlier in the week, I was at my grandmother’s house this past weekend and loaded up on fresh items from her garden. In addition to the mint I used here, I brought home a whole bag of jalapeños.

Supermarket jalapeños are rather lacking in heat these days, so I wasn’t expecting the scorching heat that came from homegrown peppers. Yes, I’ll admit that I can’t handle my food too hot, but these peppers almost set my mouth on fire. To balance out the heat, I stuffed the peppers with vegan cream cheese and coated them with the thickest layer of cornmeal batter I could get to stick.

If you’re making these as a game-day treat, you can adjust the filling and add various spices or even soy bacon bits. Enjoy the recipe—oh, and go, Saints! 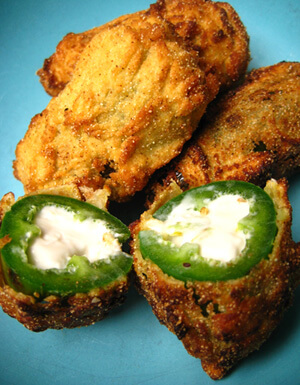 •Cut each jalapeño from end to end and remove the stem from the top. Using a small knife (or running water), remove the seeds, but be careful not to split the peppers completely.

•Stuff each pepper with approximately 1/2 Tbsp. vegan cream cheese and set aside.

•In a small bowl, combine 1/4 cup flour, 2 Tbsp. cornmeal, and the salt and pepper. Stir in the soy milk and set aside.

•In another small bowl, combine the remaining 1/2 cup flour and 1/4 cup cornmeal.

•Dip each pepper into the flour mixture, then into the batter, and then back into the flour, so that there is a thick layer of batter on the peppers.

•Drop the peppers into vegetable oil that has been heated to 375°F and let cook for 1 to 2 minutes on each side, being careful not to burn.

•Remove the cooked peppers from the oil and let drain on paper towels.