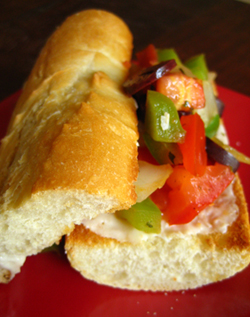 A guest post by Almost Vegetarian, “the Non-Recipe Recipe” is written in her unique narrative style that is relatable and humorous and even leaves people thinking, “This is just like me!”

A guest post by yours truly should also be appearing on Almost Vegetarian sometime today. Enjoy!

It’s more fun to just buy whatever inspires me and throw things together. But sometimes it doesn’t turn out well.

Me, taking another bite: “Really, I’d call that too much.”

Husband, gainfully eating: “No, darling, it’s fine. Just fine. But, erm, just out of curiosity, exactly how many lemons did you put in there?”

Husband, through clenched jaw: “No, no…not at all.”

Me: “Then maybe it was the three limes that were too much.”

But, sometimes, just sometimes, it does turn out well. I know when this happens because the conversation is much shorter.

Husband: “This is great. Make it again.”

So that’s what I want to share with you now. A non-recipe recipe that turned out well. It’s in recipe format. But don’t let that fool you—you can adapt it any which way you like. Almost.

For example, say there are no nice onions at the market. Then try grilling some eggplant for your sandwich instead. Or say you found a gorgeous bunch of parsley. Go ahead and sprinkle some into your sauce. Or perhaps you’ve an open bottle of red wine. Throw in a splash. And what about those leftovers in your fridge, like that half a can of tomato paste? Dump her in.

They all work. I know. I’ve done them all. And every time, my husband asked me to make it again.

Something he never did after the lemon recipe. Oh dear.