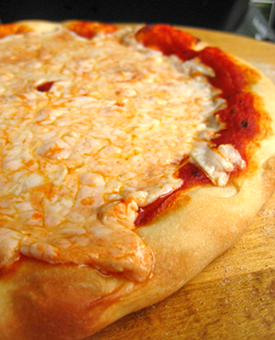 Over the last few months, there has been much discussion about this new brand of vegan mozzarella that melts just like real cheese. I’ve been putting off trying Teese because the last thing I need is to find another soy cheese I love. I already have a problem—why make it worse?

Last weekend I could no longer resist the urge, so I headed over to Cosmo’s Vegan Shoppe to buy the new cheese, which comes in at $7.50 for 1 pound, and immediately started planning my next pizza. As soon as I got home, I had to sneak a bite to get the full flavor on its own. I found it to be a little too much like margarine to eat straight up but could immediately tell from the texture that it would melt nicely.

And melt it did! It almost melted a little too much (who would have thought we’d ever say that about a vegan cheese?!). After just a few minutes in the oven, the cheese became quite runny and blended with my pizza sauce, and I was then left with an orange pizza that might be the ugliest thing I’ve ever photographed. But you can’t really judge a pizza by its looks—you have to give it a taste.

Once the pizza cooled and the cheese firmed ever so slightly, I took my first bite. The hints of margarine were still there and so was the amazing texture. In addition to melting better than any other brand of soy cheese I’ve tried, it also has more creaminess to it that more closely mimics dairy. This is definitely the cheese to give to people who are new to veganism.

If the ooze factor is what you deem essential for your pizza, then you must try Teese (you can order it here). If you don’t really care that much about how well it melts and just want something that kinda looks like cheese on your pizza, then you can just go for one of the cheaper brands you can pick up at a local supermarket, in my opinion.