The following article was written by PETA intern Heather Mangal.

As I am half Indian, it would seem appropriate for me to write an article on Indian dining, but the truth is that Indian food wasn’t always my favorite. Growing up, I rebelled against eating Indian food because my mom would make it so often. It was five years ago, when I took the plunge from being an omnivore to being a vegan, that I discovered the beauty and benefits of this awesome ethnic cuisine. Now I can’t resist the incredibly palatable flavors and wide array of choices. 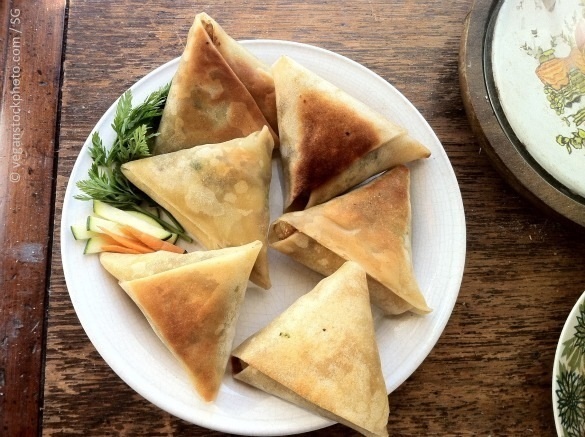 Indian food is usually considered to be a vegetarian’s jackpot, but those sneaky dairy products that are used in many Indian dishes can create a bit of a roadblock for us vegans. Here are a few tips to get you to bhaṅgṛā your way to vegan bliss.

Better Be Ghee-Free: Ghee? Yep, that’s right. Ghee is one of Indian chefs’ favorite ingredients. It’s a clarified butter that does not spoil very easily. Most Indian restaurants will substitute vegetable oil for ghee upon request, so don’t be afraid to ask for your dish to be ghee-free.

Yogurt, Schmogurt: Sauces are one of the highlights of Indian cuisine. However, chefs take pleasure in adding yogurt to some sauces to create a creamy consistency and to cool down the palette from those infamous hot spices. Just skip the items that have any indication of yogurt or cream and always double check on the dishes that you are unsure of!

Nai (No) to Naan: Naan is a leavened white bread that is a staple to the Indian dining experience—and it almost always contains a dairy product. The good news is that there are two other types of bread that are similar to naan but that are normally dairy-free! These superstars are called roti (an unleavened whole-wheat bread) and puri (a deep-fried, puffed whole-wheat bread).

When in Doubt, Turn to Tandoori: A tandoor is a traditional oven used to make Indian cuisine. Asking for vegetables to be cooked tandoori-style can almost ensure that they will not be fried in animal fat, soaked in dairy products, or covered in ghee.

Want some suggestions on awesome vegan options? How about the following:

With these tips, you can be sure to order your meals at Indian restaurants with the confidence of a Bollywood star. Gandhi would be proud!

What do you usually order when dining at Indian restaurants? Share your favorite eats by leaving a comment below!