If Dogs Had Snouts and Cats Had Feathers … 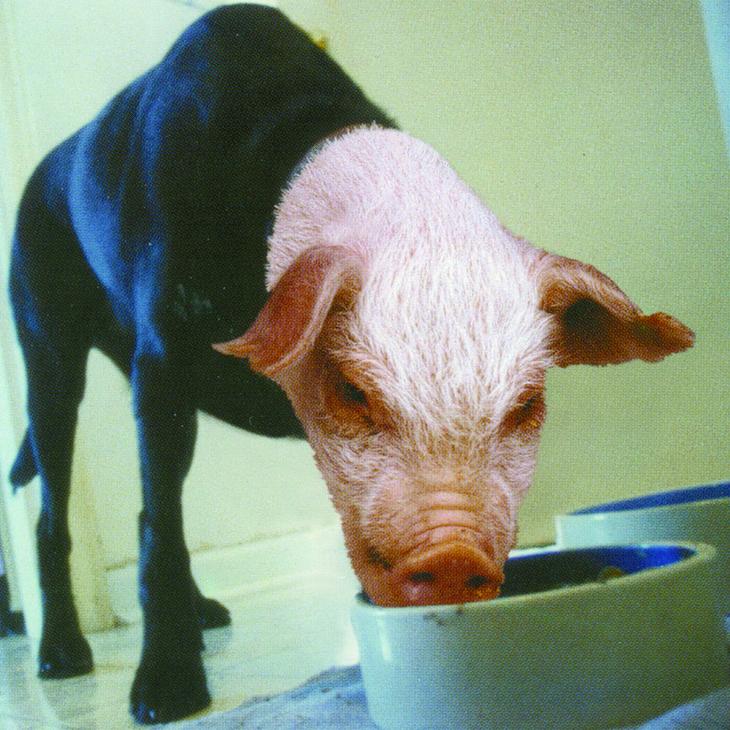 British celebrity chef Hugh Fearnley-Whittingstall recently made dog lovers howl when he stated that, from an ethical standpoint, anyone who considers it abhorrent to eat puppies should feel the same way about eating pigs. After all, pigs are intelligent, curious, and social animals.

Like the dogs I grew up with, my sponsored sanctuary pig, Harley,  loves to receive belly rubs, and he snuggles with his friends when it’s chilly. Every time I visit Harley, I can’t help but think that, had he not fallen off a transport truck crammed full of terrified animals on their way to slaughter, this happy animal contentedly snoring away in a warm barn or rooting freely in the yard would have had a very different life—a life to which no loving guardian would ever imagine subjecting his or her dog.

Pigs raised for food have their tails and testicles cut off without anesthesia, and these naturally clean animals are forced to live in such crowded and filthy conditions that they must be fed massive amounts of antibiotics just to survive. Mother pigs are continuously impregnated and confined to crates in which they cannot even turn around or nuzzle their piglets. At slaughter, pigs have their throats cut and are dumped into a tank of scalding-hot water to remove their hair, sometimes while they are still conscious and able to feel pain.

Look at your dog or cat and consider whether you want to support the suffering of animals who are able to experience pain—and joy—just as he or she is. With so many options available for a delicious, healthy, and cruelty-free vegan diet, there’s never been a better time to leave animals off your plate.

Take a look at PETA’s vegetarian/vegan starter kit for everything that you need—from great tips to mouthwatering recipes—to incorporate more plant-based foods into your diet. If you wouldn’t eat your dog, why eat a pig?