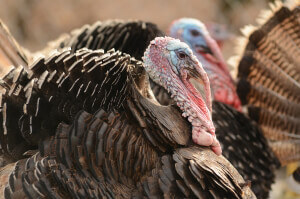 It’s that time of year again. As a Thanksgiving promotion, many supermarkets in the U.S. are offering the corpses of turkeys to customers who spend a certain amount at their stores in the weeks prior to Thanksgiving. It’s become a fairly competitive promotion in my area and in other parts of the country.

One supermarket offers a free turkey for each $400 spent. Another is offering $10 in “Turkey Bucks” for every $200 spent, with no limit on the amount that one can claim. Both stores will even donate one or more of your turkeys to a local charity! The irony is hard to escape: You are supposed to be contributing to a good cause while supporting one of the most cruel and inhumane industries out there. How charitable for everyone—except for the turkeys.

Sorry, but offering a vegan like me a turkey for my faithful business of buying their vegan food is more of an insult than a gift—and every bit as offensive to me as offering a Jewish customer a free ham for Passover. I could just decline to take the turkey, but darn it, I deserve an appropriate reward for my shopping as well. Time for this PETA Primer to take some action!

In a dual effort to benefit me and educate others, each year I ask to see the store manager to make my simple request: “My family follows a healthy vegan diet, and we patronize this store all year purchasing the many vegan foods that you have. Can you offer me a vegan alternative?” The manager is usually quick to suggest a vegetarian option like meatless lasagna. But that’s not vegan, so I am just as quick to point out that items with cheese in them are not vegan (a great moment of enlightenment for the manager). Prior to last year, we would reach a reasonably fair compromise: I would get a $10 gift card, which was about equal to the value of the free turkey.

Last year, with Tofurky products now available at the store, I was brave enough to ask the manager for a free Tofurky. I pointed out that the Tofurky Roast was comparably priced to the turkey, and he immediately agreed! With such products as Tofurky and Field Roast’s Celebration Roast now offered at many “traditional” supermarkets, why not suggest a similar arrangement with your own grocer?

Let’s all do the same so that one day, all supermarkets will offer healthy vegan options for Thanksgiving! What have your experiences been with these promotions?