Rice pudding is a dish eaten around the world in many variations. It always contains some type of milk or cream to help achieve its thick, rich consistency, but the good news is that you don’t have to stick with just plain ol’ soy milk. Coconut milk is a great alternative to reach for instead. 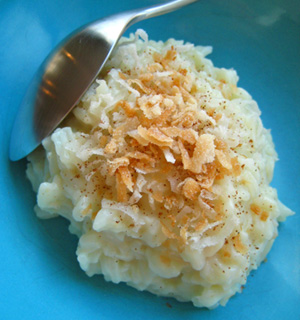 This recipe for coconut rice pudding calls for a combination of both soy and coconut milks, which creates a nutty coconut flavor. To highlight this flavor, I topped the dish with a light dusting of yummy toasted coconut flakes. Enjoy!