Why Xylitol In Gum Is Bad for Dogs 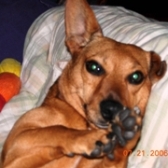 The following post was originally published by Karen on KP’s Dog Blog, May 14, 2008.

I used to say that my dog Dexter couldn’t walk and chew gum at the same time, because whenever we were out on a walk and I gave him a treat, he would stop walking in order to chew. He’s gotten quite a bit better at this, but I hope he never really gets to try out his gum-chewing skills because many gums today are extremely toxic to dogs.

Sugar-free gum very often contains a sugar substitute called xylitol. A blog post by an editor with the Los Angeles Times Sports Section, Steve Clow, detailed the ordeal that can follow when dogs get their paws on xylitol-containing gum or other xylitol-containing products.

Clow’s dachshund, Hershey, wolfed down 15 mini-sticks of sugarless gum and had to be rushed to the emergency room. Xylitol is the sweetest of the sugar substitutes sold in bulk, and it has really taken off in the food and dental hygiene industries. Not only can you find it in chewing gum, it’s also added to toothpaste, mints, mouthwash, candy, and many foods as a sugar substitute (you’ll see it on the label).

It’s great for humans because it inhibits the bacteria that cause tooth decay and can cut calories from sugar, but it does a number on dogs. When dogs ingest it, their blood sugar plummets to dangerous levels and they need medical attention right away.

If you catch Fido eating a xylitol-containing product, try to induce vomiting by giving him a tablespoonful or two of hydrogen peroxide. Then rush him to the vet, but on the way, try to get him to eat something sweet and rich, like soy ice cream. This can help to prop up his blood sugar while you’re en route.

Without veterinary treatment, Fido can start to experience vomiting, lack of coordination, and weakness within a half-hour and proceed quickly to seizures, coma, and, finally, liver failure.

This is serious! So keep that sugar-free gum, toothpaste, and any other xylitol-containing products out of your chowhound’s reach. Don’t keep gum in your coat pocket, either.