Among the top 10 mutterings I never expected to hear in the grocery store aisles is, “But mom, how do you even milk a cockroach?” However, if a group of international scientists has its way, you’ll be replacing your post-workout protein shake with insect secretion. Sounds revolting, right? Luckily, cockroach milk won’t be hitting supermarket shelves anytime soon, if ever. 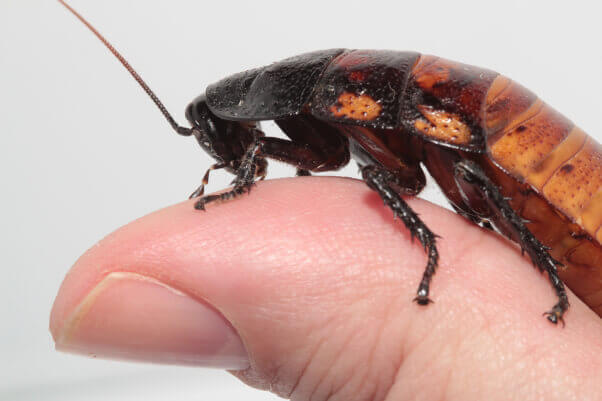 So, how does a cockroach get “milked”? Unsurprisingly, the method is neither humane nor as appetizing as putting almonds in a blender. According to Forbes, the abdomen of cockroaches must be opened, killing but not crushing them. Because of the time and resources it would take to produce enough cockroach milk for humans to drink, it will likely never be manufactured or marketed the same way that plant-based milks are. Thank goodness, right?

But while we breathe a collective sigh of relief, many people still seem to find it acceptable to drink cow’s milk. Yes, it would be nauseating to drink milk from insects, as it’s meant for their young. Likewise, it’s inhumane and disturbing to drink milk from a cow—which is intended to feed calves.

Although producing cockroach milk for human consumption is a relatively new concept—still in a research-only phase—cows have been suffering in the dairy industry for a long time. Typically, those used for their milk are repeatedly impregnated by means of artificial insemination. Calves are generally torn away from their mothers within a day or two of birth, which causes both mother and baby extreme distress. Mother cows can be heard calling for their calves for days. Female calves usually endure the same fate as their mothers, while males are often used for veal. After their calves have been taken away from them, mother cows are hooked up—two or more times a day—to milking machines.

Many cows used for their milk suffer from mastitis, one of the leading causes of death in adult cows in the dairy industry. Their natural life expectancy is about 20 years, but those used by the dairy industry are typically killed after about five years because their bodies wear out from constantly being pregnant or lactating. A dairy-industry study found that by the time they’re killed, nearly 50 percent of them are lame from standing on concrete flooring and filth in intensive confinement.

While cows suffer on farms, humans who drink their milk increase their own chances of developing heart disease, diabetes, cancer, and many other ailments. A U.K. study showed that people who suffered from irregular heartbeats, asthma, headaches, fatigue, and digestive problems “showed marked and often complete improvements in their health after cutting milk from their diets.”

Besides humans, no species drinks milk beyond infancy—or drinks the milk of another species. Cow’s milk is formulated specifically for calves, just as cockroach milk meets the nutritional needs of newborn cockroaches. PETA U.K. recently asked strangers to try “dog’s” milk in order to gauge whether people could stomach it. The reaction to the idea of drinking a canine secretion was the same across the board: disgust. But if the thought of drinking dog’s milk makes you ill, why drink milk from a cow? Dog’s milk, cat’s milk, rat’s milk, cow’s milk—what’s the difference, really?

The bottom line is this: not your species, not your milk. Luckily, for every dairy product, there’s a cruelty-free alternative. In addition to being more humane than cow’s milk, plant-based milks and cheeses are generally lower in saturated fat and calories and contain no cholesterol. If you could stop contributing to the cruel dairy industry, do something good for the environment, and improve your health and well-being, why wouldn’t you?

Find the perfect humane milk to complement your bowl of cereal. Check out our list of plant-based milk options. With dozens of vegan choices out there, your morning bowl of cereal will never be boring or involve cruelty to animals.

More concerned with nutrition than taste? Luckily for all you fitness fanatics, you don’t have to choose one or the other. Check out our guide to vegan protein and supplements—and don’t worry: Insect secretions didn’t make the list!