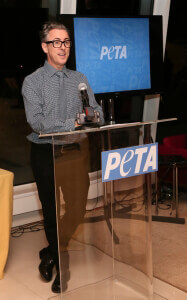 What do the cast members of Cabaret look forward to for refueling after one of their high-energy performances? A hearty bowl of leading man Alan Cumming’s vegan potato stew, of course! The busy actor—he also stars in CBS’ The Good Wife and recently released his harrowing memoir, Not My Father’s Son—makes his signature Scottish “stovies” for the entire cast every Wednesday, after the matinee performance. “I am such an old granny,” he says. “I make a vegan version that is delicious in my crock pot.” Sienna Miller joins the cast on February 15 as Sally Bowles, and the Broadway blockbuster closes on March 29, so act fast if you’re a fan.

According to his memoir, Cumming’s affinity for animals goes all the way back to his childhood on a farm in Scotland. He compares the abuse that he endured as a child at the hands of his father—who once violently hacked off Cumming’s hair in a fit of rage—to that inflicted on animals on the farm. “[M]y head was propelled forward by his hand, the other one wielding a rusty pair of clippers that we used on the sheep we had in the field in front of our house,” writes Cumming. “They were blunt and dirty and they cut my skin, but my father shaved my head with them, holding me down like an animal.”

He has written the following about his recipe:

Stovies is a Scottish dish that is traditionally made with beef dripping, but I am a vegan so I have made up my own version.

It is real peasant food and ideal for people who, like me, love to have a plateful of one thing. I much prefer a mush-style dish to something with loads of different components.

Stovies are so great for parties on cold winter nights because you can just leave them on the stove and people can help themselves throughout the night as they please.

This is his recipe:

1–2 Tbsp. olive oil
3-4 cloves garlic (more, if you like)
4 large onions
8–10 large potatoes
Tamari or dark soy sauce, to taste
Worcestershire sauce, to taste
Salt and pepper, to taste
A couple of handfuls of soya mince