Taquitos (aka, flautas) are a Mexican dish of rolled tortillas filled with meat and cheese and then fried. At first glance, they don’t seem like something that could be made vegan, let alone lower in calories and fat. But, by using vegan ingredients rather than animal products filled with cholesterol and saturated fat and by baking instead of frying, we can reduce the guilt factor significantly.

These were extremely easy to make and would make a great appetizer for a party or potluck. They were such a hit with my family that next time I think I might double the recipe! I hope you enjoy these easy taquitos as much as we did. 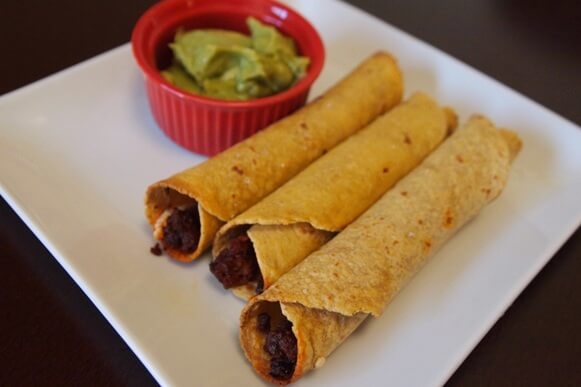 You could easily replace the filling in this recipe with whatever you have lying around. I think a combo of black beans, vegan cream cheese, and diced jalapeños would be delicious. Another filling that I’m dying to try is buffalo tofu with vegan ranch dressing. The possibilities are endless!