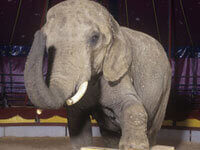 My children understand that circuses are cruel to animals, and they have no desire to go see the circus. But they also don’t want to rock the boat, so when my daughter’s school announced that it was planning to take students on a field trip to the circus, I knew that I had to step in. I’m not one of those parents who look for a battle—it isn’t always easy for me to disagree with others. But in this case, I knew that I’d be speaking for beings who can’t speak for themselves. That’s important for animals in circuses, and it’s also a valuable lesson to teach our children.

First, I let my daughter’s teacher know why I was concerned. I gave her some information from PETA about circuses that use animals. Then I scheduled an appointment with the principal. I was courteous and polite, so they were too. I explained the ways in which circuses harm animals and suggested that this isn’t the kind of lesson that we want to teach our kids. I shared a statement from the U.S. National Parent-Teacher Association Congress: “Children trained to extend justice, kindness, and mercy to animals become more just, kind, and considerate in their relation[s] with each other. Character training along these lines in youth will result in men and women of broader sympathies; more law-abiding—in every respect more valuable—citizens.”

I was armed with a variety of alternatives that the school could consider instead of a field trip to a circus. For example, modern museums have shifted from offering dusty, musty tours that kids dreaded to providing innovative and interactive outings that give kids hands-on experiences that they’ll enjoy and remember. Most YMCAs offer free or low-cost day programs ranging from art classes to musical forums. Virtually every state capitol welcomes class tours and offers introductions to elected officials so that students can learn firsthand about the day-to-day workings of the government. I concluded by saying that if the school was intent on a circus outing, there are loads of circuses traveling around the country that have eliminated animal acts. A much better option would be volunteering at a wildlife rescue and rehabilitation center, where injured and orphaned animals are cared for until they can be returned to their natural homes. I offered to work with the school to help arrange any of these more humane field trips.

After hearing me out and examining the material that I supplied, the principal and the teacher agreed that another field trip would be more appropriate. I was proud of myself for speaking up and realized that parents do have a lot of influence in the classroom. But most of all, I was happy that my children’s school refused to support the cruelty of the circus.