Real Men Stand Up for Animals: Q&A With Charlie Frattini 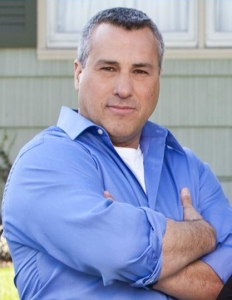 Charlie Frattini—best known for his role as the construction expert on A&E’s Sell This House: Extreme—is a tough guy and proud of it. But while he’s gained notoriety as a hardworking, take-no-crap kind of person, Charlie is also an outstanding animal advocate who proves that real men stand up for animals.

You’ve been described as “tough as nails.” Why do you have a soft spot for animals?

My “soft spot” for animals was born out of my childhood. I was severely bullied as a young boy growing up in Brooklyn, New York. I know what it’s like to be unaccepted. I consider poor treatment of animals as another form of bullying. I earned the title “Tough as Nails” by not allowing myself to be bullied anymore and overcoming ANY obstacle to succeed. It’s not that I fought back but rather learned to defend myself, and I use that character trait to defend others who I witness being bullied. I strongly feel that animals are bullied or neglected by people who feel they can do it. That bothers me. A dog, cat, or any animal has the same right to a happy life as any human being. If we all take the time to make a difference in an animal’s life, we can make a difference in society as a whole.

Tell us about your animal companions. What makes them special to you, and how did they become a part of your family?

We have two rescued dogs who were adopted from the SPCA of Westchester County. One is a male Catahoula leopard dog mix, and the other is a female pit bull mix. They are named Ash and Layla, respectively. I have had purebred Rottweilers in the past, and I can safely say that even with the joy those animals brought me, I find having rescues is a more satisfying experience. Not only is my family making a difference in the world, but I firmly believe these animals “know” they are rescues and they show their appreciation by being loyal members of our family.

Would you advocate adoption from an animal shelter if someone is thinking about adding a dog or cat to his or her family?

If someone is looking to make a difference in this world, I whole-heartedly recommend shelter pet adoption. And if you’re a parent who is looking to make a difference in the future of our society, what better lesson for a child than being a part of choosing a shelter/rescue animal for adoption? My youngest son was a part of choosing a dog and literally saving a life. It is something I know he will never forget and will have a major impact in his adult decision-making process.

You work with a lot of homeowners in your line of work. What would you recommend that they do to keep their animal companions safe and happy?

I have three pieces of advice for homeowners: adopt with maturity and knowledgeable commitment, adopt with the intent of caring for the rescued animal in a similar or better manner than the shelter, and finally to keep their animals protected from danger.

Tell us about your Thanksgiving tradition.

Thanksgiving has taken on a new meaning in the Frattini household. It all started when my wife went to the local farm for a Thanksgiving turkey. We share the same passion for animals, and she returned with a live turkey in her Mini Cooper. The hen escaped from her box while in the car, and her majestic head was sticking out of the car’s sunroof as my wife happily drove up our driveway with the new addition to our family. A turkey hen we named Next. Her name was derived from her being the NEXT turkey to be killed by the farm butcher. We now needed a shelter for Next, so I spent a weekend building a coop that rivals some apartments in New York City. There is a roof to protect her from the elements. Wire mesh all around, including the floor to protect her from raccoons, possums, or foxes digging under the coop. And two houses for her to be warm in the winter and have a shelter to lay eggs in the spring and summer.

Next made a huge impact on our lives. She led to rescues of live chickens during the year, and wouldn’t you know it: Thanksgiving came around again. We rescued another turkey. This “rescue operation” became a virus for us. This time the turkey is a tom we named Run. His name was derived from “run for your life.” Next welcomed Run like a queen to her king. I wake up every morning to the gentle sound of a turkey happily gobbling away the start of his day.

I spend time in their coop talking to them and massaging Next’s back. Yeah, I said talking to them and massaging her back. When I walk up to their pen, Run starts gobbling happily, as if inviting me to come in and play with him. I whip out my iPhone and play my turkey call app (Free Turkey Calls by Smart Wire LLC), and I use it to “talk” to them. Next immediately finds a place to sit and wait for me. Her beak was clipped, and the butcher amputated her toes, so she wobbles when she walks—but she is happy and eagerly awaits her daily massage. I trudge my way past Run and sit by Next and rub her back and tail. She spreads her wings and clicks her beak in acceptance as she just enjoys the attention. The massage is over when Next decides it is over. I’m OK with that. She had a bleak future two years ago, and now she is living well. A few turkey calls later and after placing feed, hay, and water for them, I exit the coop, making sure it is secure and safe from predators. As I walk away from the coop, followed by Ash and Layla, I take pride in being known as “tough as nails” in the construction/engineering world and  compassionate and sensitive to our animals. I make a difference in our children’s lives and the lives of our animals. I’m thinking to the future, two Thanksgivings from now. I am sure our coop will have to be expanded.

Tell us how animals have enriched your life and why it is important to you to speak up for their protection?

How have animals enriched my life? Are you kidding? I sit and massage a turkey’s back and tail because I know she enjoys it! I allow my dog to sneak up on my bed even though she makes it uncomfortable while we sleep! I like the comfort, security, and friendship the animals provide my family and me. There is nothing like petting a dog who is a vital member of our family. Petting him or her in the warmth of our home on a cold snowy day, knowing we have made a difference in their lives and they have made one in ours. By adopting them, we altered their history for the better. Everyone should experience the joy that comes from that.