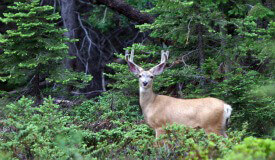 November is the peak month for collisions between cars and deer, according to the Insurance Institute for Highway Safety. Insurance groups estimate that about one in every 100 drivers will be involved in a deer-vehicle collision at some point in his or her life. A fatal crash late last month in Indiana illustrates how heartbreaking such encounters can be. Seven people—including four children—were killed after their minivan hit a deer and was subsequently struck by a semi-trailer.

While hunters invariably point to such tragedies as justification for killing even more deer, the blame for deer-vehicle collisions falls at least partly on their own shoulders.

Pennsylvania-based Erie Insurance, which has analyzed deer-vehicle collision data in the state for more than a decade, found that the opening day and opening Saturday of deer hunting season are “[t]wo of the most dangerous days to drive.” According to the Missouri Insurance Information Service, increased deer activity associated with hunting is a “major factor” in the rise in deer-vehicle collisions in the last three months of the year. With more people (hunters) in the woods, deer are spooked out of wooded areas—often out onto the road.

Hunting also increases deer populations—which increases the likelihood that deer-car collisions will occur. While several studies have suggested that sterilization programs may provide an effective, long-term solution to controlling deer populations, hunting just makes the problem worse. It’s been shown, for example, that in hunted populations, does are more likely to have twins rather than single fawns and are more likely to reproduce at a younger age. Immediately following a hunt, there’s less competition for food. The surviving deer are better nourished, which can lead to a higher reproductive rate and lower neonatal mortality.

The state agencies responsible for wildlife “management” know this, of course, but they’re primarily run by hunters, who hardly have the animals’ best interests in mind. So, instead of setting up sterilization programs, they destroy the deer’s homes by clear-cutting to increase the amount of vegetation for the deer to eat—further increasing their population. Such programs help to ensure that there are plenty of animals for hunters to kill (not to mention plenty of revenue from the sale of hunting licenses).

Simple, nonlethal methods can reduce the risk of deer-vehicle collisions. A team of scientists from the University of Alberta found that simply placing warning signs in hotspots where deer are known to cross roads can reduce collisions by 34 percent. Other communities are experimenting with roadside sensors that trigger lights and whistles as cars approach to scare deer away and with laser beams that sound alarms to alert motorists to the presence of deer.

Drivers should also slow down and watch the road carefully—especially during hunting season. Scan the side of the road for wildlife and use high-beam headlights at night when there is no oncoming traffic. Also be aware that deer tend to travel in groups, so if you see one deer, slow down and watch for more. In many deer-vehicle accidents, the driver slowed down for one deer, then sped up and hit another one.

Hunters like to say that killing deer is the only way to prevent traffic collisions with them, but it’s not. When hunting season turns deer territories into a war zone, it’s no wonder that the animals panic and run—often right out onto our roadways.