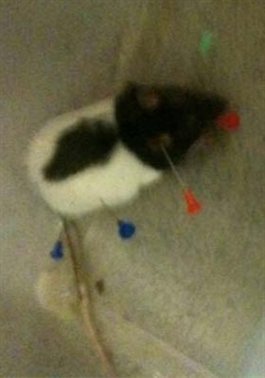 In a rare case of legal protection for a rat, a Denver woman has pleaded guilty to a cruelty-to-animals charge for torturing and killing a rat. Tashaya Abbott and Alison Milke bought a rat from a pet store to feed live to a snake, but the snake did not eat the animal for four days—during which time the terrified rodent was confined to a tank with the snake. So the young women reportedly electroshocked, shot with blow darts multiple times, and finally crushed the rat to death. Evidently thinking that this animal’s horrific suffering and death were something to laugh about, Milke posted a photo of the rat to her Facebook page and boasted about the crime that they had committed.

A PETA supporter alerted us, and we immediately notified law enforcement and pushed for the women to be prosecuted.

The judge ordered Abbott to pay a $125 fine and complete 50 hours of community service and banned her from owning any animals for a year. There is still an outstanding warrant for Milke, who is believed to be in Florida now, and PETA is pushing hard for her prosecution as well.

If you spot any evidence of potential animal abuse on social-networking sites, contact PETA right away, and we will work to have the offenders prosecuted.