The following article was written by Christina Schwarz, author of Drowning Ruth and All Is Vanity, among other novels. Her most recent book, The Edge of the Earth, was published in April.

Back in May 2007, I saw a story on the local news: A dog with a bullet in her back and her six puppies had landed in a Los Angeles animal shelter and desperately needed fostering. We were moved, but the timing could not have been more inconvenient. I’d begun work on my latest novel, The Edge of the Earth, but I couldn’t make progress until I spent a few months in Big Sur, California, where I’d set my story. I can’t seem to set a novel in a place where I haven’t lived. To imagine fully, I have to be able to ground my dream in a thousand concrete physical details, so I needed to go to Big Sur, but at the same time, here were seven concrete physical creatures whose very existence might require that I stay in Los Angeles.

I called the shelter to find out the details, but I balked at actually scooping up the dogs. Surely, some local rescue group, the sort of people who did this kind of thing all the time, would take on this project. We didn’t know anything about raising a family of puppies, plus we already had a dog and a giant cat (not to mention a kindergartener). We let the weekend go by and called again on Monday. No one else was willing to take them—at least no one whom the shelter trusted not to turn these pit-bull mixes into fighting dogs. Half reluctantly, we agreed to drive to the shelter, and the moment we walked in the door, the shelter staff, knowing that the odds were against these dogs, decided that we were their only hope. China and her six puppies were in the back of our car within 10 minutes. 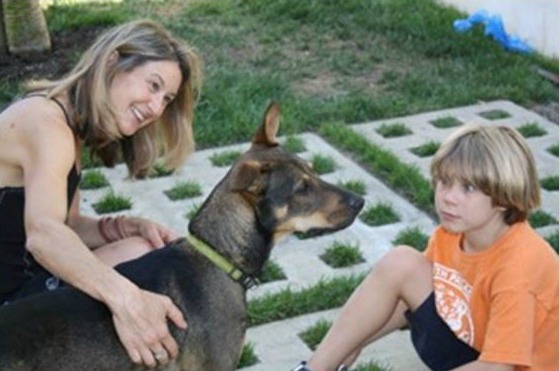 I can’t say that caring for these dogs was ever easy. They all had pneumonia, which meant frantic trips to the vet and sleepless nights on the bathroom floor so that we could pound on their little rib cages every three hours. One had to be euthanized, an experience that continues to haunt me and was traumatic for our son. China also had to be trained not to attempt to eat the cat. Most frustrating and anxiety-provoking was trying to find homes for the puppies, which we thought would be easy, given their sweet natures, their guaranteed socialization, and the progressive character of our town. It was a rude awakening to discover that people who drive a Prius still think it’s OK to reject a mixed-breed puppy in favor of a purebred.

I’m acutely aware that rescuing this family was, in the grand scheme of things, almost meaningless. The number of animals in need is overwhelming, and we’ve helped so few. Still, for two families, one canine and one human, this was life-changing. For the dogs, it was, of course, no more than they deserved—humans have made these creatures dependent on us. How terrible it is, therefore, that we are so seldom dependable. For the humans, it was a lesson in stepping up, in choosing to act as our conscience—rather than our convenience—dictated. My hope is that this action will help to shape my son’s future, although if he continues to grow in his compassion for animals, as I trust he will, the credit will mostly have to go to China and to the puppy we kept.