A Naples, Florida, man was convicted of cruelty when his dog died after being locked in a car for four hours on a warm day. The dead dog’s temperature was still almost 110ºF a full two hours after police removed him from the car. The man was sentenced to six months in jail and slapped with a $1,000 fine for “animal cruelty by abandonment.”

“I always try to have sympathy for defendants before making a decision,” the sentencing judge told the man. “I don’t have any sympathy for you.”

Why was the judge so unsympathetic? Because he believed that the man, a doctor, should have known better than to leave a dog in a car for hours with one window cracked open just an inch. Indeed, all of us should know better, especially when temperatures climb into the 80s and 90s. But even a mild day can be dangerous. Recently, a dog died after being locked in a parked car on a sunny, 67°F day in Albany, New York, even though the car windows had allegedly been left open a crack.

During the “dog days” of summer, the temperature inside a parked car can climb to well above 100ºF in just a matter of minutes. Beating the heat is extra tough for dogs because they can only cool themselves by panting and sweating through their paw pads. 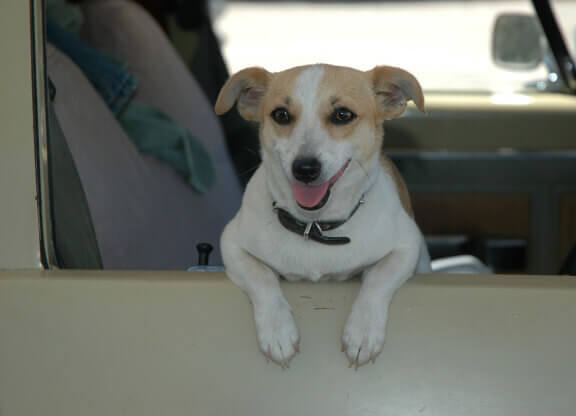 Heatstroke can come on quickly and result in brain damage or death. Watch for symptoms such as restlessness, excessive thirst, heavy panting, lethargy, lack of appetite, dark tongue, rapid heartbeat, fever, vomiting, or lack of coordination. If your dog shows any of these symptoms, get her or him into the shade immediately and call your veterinarian. Lower the animal’s body temperature gradually by providing water to drink, applying a cold towel or ice pack to the head, neck, and chest, or immersing the dog in lukewarm (not cold) water.

“Every summer, we hear about tragedies that could have been prevented,” says PETA casework division manager Martin Mersereau. “Many people don’t realize how quickly animals left in a hot car or outside without shade or water can succumb to the heat.”

Prevent Heatstroke by Taking These Precautions:

If you see a dog in a car and in distress, take down the car’s color, model, make, and license-plate number, have the owner paged inside nearby stores, and call local humane authorities or police. Have someone keep an eye on the dog. If police are unresponsive or too slow and the dog’s life appears to be in imminent danger, find a witness (or several) who will back your assessment, take steps to remove the suffering animal, and then wait for authorities to arrive.

Contact PETA for a supply of fliers on the dangers of heatstroke to leave on windshields.

Don’t carry your dog in the bed of a pickup truck. This is always dangerous, but the heat brings the added danger of burning the dog’s feet on the hot metal.

Trim heavy-coated dogs’ fur, but leave an inch for protection against insects and sunburn. Keep an eye on areas where hair is thin, like eyelids, ears, and nose as they can get sunburned.

Keep your dog indoors. If he or she must stay outside for long, avoid the hottest part of the day.

Provide shade, water, and a kiddie pool. Keep drinking water in an anchored bucket or a heavy bowl that won’t tip over.

Be a watchdog for chained dogs. Make sure that they have food, water, and shelter. If you see a dog in distress, contact humane authorities. Give the dog immediate relief by providing water.