Air Travel With Your Animal Companion

Though flying might sometimes seem to be the fastest and least stressful way to go, it can turn out to be the opposite if your animals are forced to fly in the cargo hold. 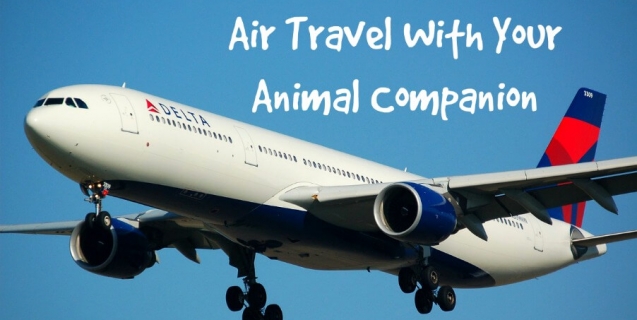 According to the Airline Transportation Association, more than 5,000 animals are killed, injured, or lost on commercial flights each year. Horror stories include that of a dog named Enzo, who died of heat stress in the cargo bay despite the fact that his human companion repeatedly asked the airplane crew to check on him as the plane sat delayed for hours on the runway. Another dog named Jed was brought out of the holding bay not breathing and covered in urine, feces, and vomit. He had died of suffocation from a lack of oxygen. Still more animals froze to death or were injured from rough handling.

We strongly advise against transporting your animal companion by air in the cargo area.

Some airlines allow animals to travel in the main cabin, and some only allow animals to be checked as baggage. Some airlines restrict the times of year that animals can fly in the cargo hold; Southwest and Jet Blue do not allow animals to be checked as baggage and Florida-based Companion Air —a small airline hoping to get off the ground soon—will cater to people and their animals by allowing all members of the family to ride in the cabin. Phoenix Sky Harbor International Airport has dog parks and a rest area for animals just outside its main terminals.

Flying an animal in the cargo compartment can be extremely dangerous—even fatal. Of the hundreds of thousands of animals who are put on airplanes every year, thousands die for a variety of reasons. Cargo holds generally have no heat or air conditioning, and they can reach extreme temperatures quickly. Most cargo compartments are kept unventilated in order to help prevent fires. Sometimes cats and dogs escape from carriers that have been damaged in transit and become lost inside airplanes or airplane hangars. As of June 2005, airlines are required by law to produce monthly reports of animals’ deaths or injuries for the U.S. Department of Transportation, and consumers will be able to review those reports.

If your animal friend must fly, here are some tips to help make the experience a safe one:

If you absolutely must fly your animal friend in the cargo hold, take the following precautions:

1. Write a letter of complaint detailing the mistreatment and send it to the CEO of the airline. Please be sure to specify the date of the event and your flight number, and mention the names of the airline personnel who were involved.

2. Send a copy of this letter to the U.S. Department of Agriculture, whose job it is to make sure that airlines and other industries are not operating in violation of the federal Animal Welfare Act:

3. Warn others of the airline’s neglect in a letter to the editor of your local newspaper.