Can Your Dog or Cat Improve Your Health? 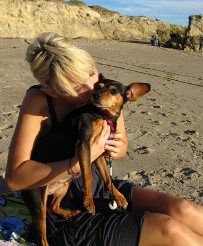 We know that adopting a healthy vegan diet can help you fight high cholesterol and obesity, but can simply living with a dog or cat have the same effect? According to several recent studies, the answer is a resounding “Yes.”

To start with the obvious, a recent University of Michigan study found that guardians who are conscientious about regularly walking their dogs tend to have lower rates of obesity—ostensibly because they are getting a lot of exercise. But the surprising finding by the researchers who conducted the study was that guardians who walked their dogs often also tended to be more physically active in general, even after accounting for walking a dog. A separate study by the National Institutes of Health (NIH)  has also found that walking a dog improves mobility around the house for men and women as old as 82. Another NIH study of 421 adults found that having a dog improved heart-attack victims’ one-year survival rate. And the Centers for Disease Control and Prevention states that having a companion animal can decrease cholesterol, triglycerides, and blood pressure.

Many animal guardians have experienced the unique soothing effect that their animals have on them, and some of the new research shows just how strong the health benefits of that soothing can be. One study of 240 married couples showed that animal guardians had lower pulse rates and blood pressure compared to couples without companion animals. And animal companions often reduce stress better than human companions do. Even recovery times from illnesses were shorter for people when they were with their animals than when they were with their spouse or a friend.

So if you’ve been thinking about adopting a dog, cat, or other animal in need of a loving home, there’s now one more reason to visit a local animal shelter and welcome a new member into your family—for your health!