Matchup of the Week: ‘Chicken’ Nuggets 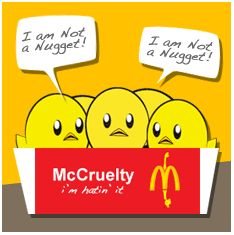 The following article was written by Ashley Palmer.

Looking for a quick snack or a mini-meal? For many Americans, chicken nuggets seem to qualify. So what exactly do you get when you eat just four chicken nuggets? Many people may be getting a lot more than they bargained for, like unwanted fat and cholesterol.

Luckily, there are lots of delicious and healthy ways to get your nugget fix. So how do they compare? Check out the chart below to see for yourself.

Not only does McCruelty continue to slaughter chickens using cruel and outdated methods, its products are also unhealthy. McDonald’s chicken nuggets have twice as much fat and 30 mg. more cholesterol than the vegan Boca nuggets (FYI: cholesterol is non-existent in vegan foods!). And guess which has more protein? The meatless ones!

So next time you’re in the mood for some “nugs,” grab a vegan version and leave the animal flesh off your plate.