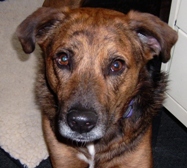 You may have thought that this post was going to be about teaching your dog to obey you faithfully, no questions asked, but it’s not. It’s actually about human obedience.

There is a scary little piece of the human psyche that, under the right circumstances, allows people to stop thinking for themselves and to relinquish all responsibility for their own actions. When people use that familiar old excuse, “I’m just following orders,” they are operating under the influence of that mindset. I don’t know if there’s a name for it, but let’s just call it “blind-obedience mode.”

An extreme and very chilling example of this mentality was a series of experiments conducted by Yale psychologist Stanley Milgram in the 1960s and ’70s. In the experiments, participants were led to believe that they were delivering electric shocks of increasingly high voltage to a man in a separate room every time he answered a question incorrectly. In reality, no one was getting shocked (the researchers were using a tape recording of the man’s screams), but the participants thought he was. As the voltage increased, many participants became uncomfortable, but all it took to make most of them continue to deliver the punishment was an authority figure in a white coat insisting that they continue.

The truly horrific results of the Milgram experiments (reproduced again and again all over the world) showed that about 65 percent of people were prepared to deliver a lethal level of shock to the man in the next room. (Incidentally, some of our primate cousins perform in a much more humane manner, refusing to harm their cohorts, even in exchange for food after having been starved.) There is a very important lesson to be learned from this: Question authority! When a dog trainer or a veterinarian in a white coat tells you to do something, don’t shift into blind-obedience mode. Retain your own authority and think for yourself: “Do I agree with this? How would I like it if someone did this to me?”

I had both a dog trainer and a veterinarian suggest that I use a prong collar on my dog Dexter to keep him in line during walks. In both cases, I said, “Sorry that’s not going to happen,” but I see prong collars all over the place! These collars are specifically designed to inflict pain by pinching a dog’s neck with metal prongs that jab further into the neck the more the dog pulls. Is that any way to treat your best friend?

Resisting blind-obedience mode is especially important when it comes to our dogs’ health care. When my late 11-year-old husky, Darby, got bone cancer in his thigh, the veterinary surgeon actually recommended amputation of that leg. Darby would have endured an enormous amount of prolonged pain and suffering while recovering from such an invasive surgery. Plus, there was no guarantee that the cancer wouldn’t bounce right back in a few months’ time!

Instead, I opted to have him humanely euthanized at home in a calm and peaceful setting, surrounded by loving friends. I truly pity dogs who are forced to spend the last bit of their lives trying to recover from an amputated limb or some other “heroic” surgery. There are many fates worse than death, and that is one of them.

Here are several real-life examples of inhumane advice that I’ve heard given by authority figures. In each case, readily available humane alternatives exist-see if you can think of one!

• A dog trainer claims that dogs “love” being locked inside a crate for hours at a time and that it’s OK to leave them crated while you go to work for nine hours and then crate them again at night in order to keep them safe and the house clean.

• A dog trainer tells her clients to spray Bitter Apple into their dogs’ mouths whenever the dogs bark too much.

• An associate at a pet supply store recommends an invisible fence for keeping dogs in the yard without having to put up a real fence. The invisible fence delivers electric shocks to the dogs whenever they get too close to it.

• A veterinarian wants to biopsy a growth on an elderly dog’s chest; the growth has been the same size for two years and isn’t causing any problems.

• An orthopedic surgeon recommends that a dog with a limp refrain from absolutely all exercise (no walks, no romping in the backyard) for six weeks, even though there is no guarantee that it will make the limp go away.

• A veterinary internist recommends putting a 10-year-old dog with a picky appetite on steroids for the rest of his life and feeding him a bland, starchy diet that he doesn’t like.

Just remember that you are your dog’s biggest advocate, so don’t take that responsibility lightly. Your dog’s welfare is completely up to you. You have a brain, you have access to the Internet, and you can do your own research. Knowledge is not the exclusive property of veterinarians, dog trainers, or any other authority figures. There is no reason to blindly follow anyone’s advice without first determining for yourself whether it’s the most humane option.