Did you know that there are more than 4,500 distinct species of crabs? From the long-legged spider crab to the minuscule pea crab, all have their own unique characteristics. Humans dismember, kill, and eat many of these species. In Florida, workers rip the claws off live stone crabs, then throw them back into the water—an excruciatingly painful process that leaves them unable to defend or feed themselves. All crabs experience pain and—like all animals—should be respected and left alone to live as they choose.

Here are some of the crab species that humans commonly catch, kill, and eat.

Blue crabs are commonly found on the East Coast of the U.S., where humans catch, kill, and tear them apart in order to eat the flesh hidden under their exoskeletons. In their natural environment, blue crabs are defensive scavengers who value their territory and aren’t afraid to protect it. They have great vision, and they can communicate with each other from a distance using both visual and chemical cues.

When humans drag blue crabs from their marine homes, they’re tossed together and kept alive while being transported and sold—an extremely stressful experience for a territorial species. They’re then often stacked on top of one another in large pots and steamed alive. After this terrifying and painful death, humans dissect their carcasses. The exoskeleton that evolved to protect blue crabs from predators is tough to get through—so humans rip off their claws, legs, gills, and other body parts before snapping their entire body in half and picking out the flesh. 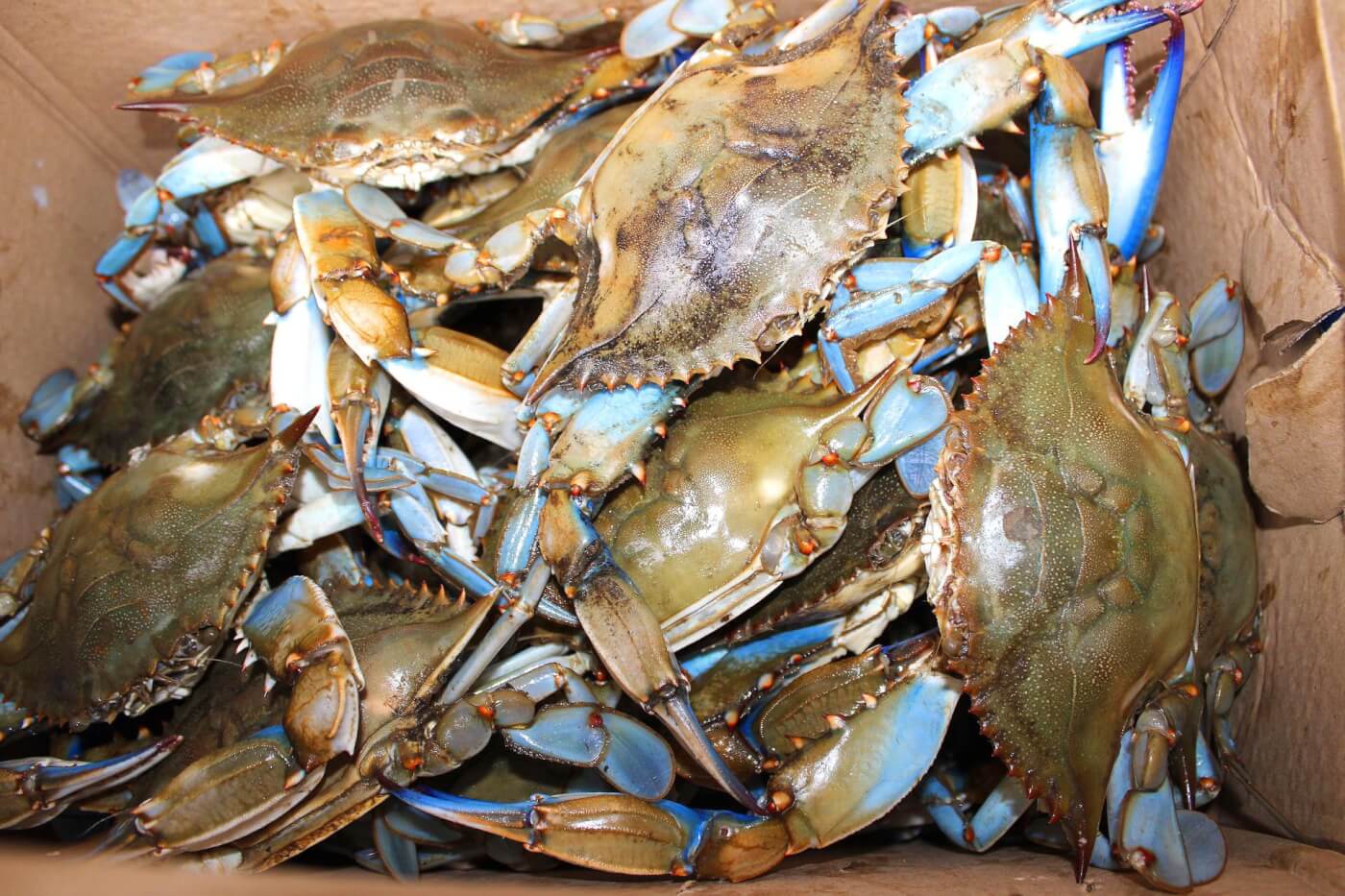 Found living along the sandy sea floor from Alaska to Baja, Mexico, Dungeness crabs aren’t easy to catch. Nevertheless, the crab industry not only kills countless crabs each year but also kills and injures other marine animals. In 2016 alone, 71 whales were caught in Dungeness crab pots off the coasts of California, Oregon, and Washington. 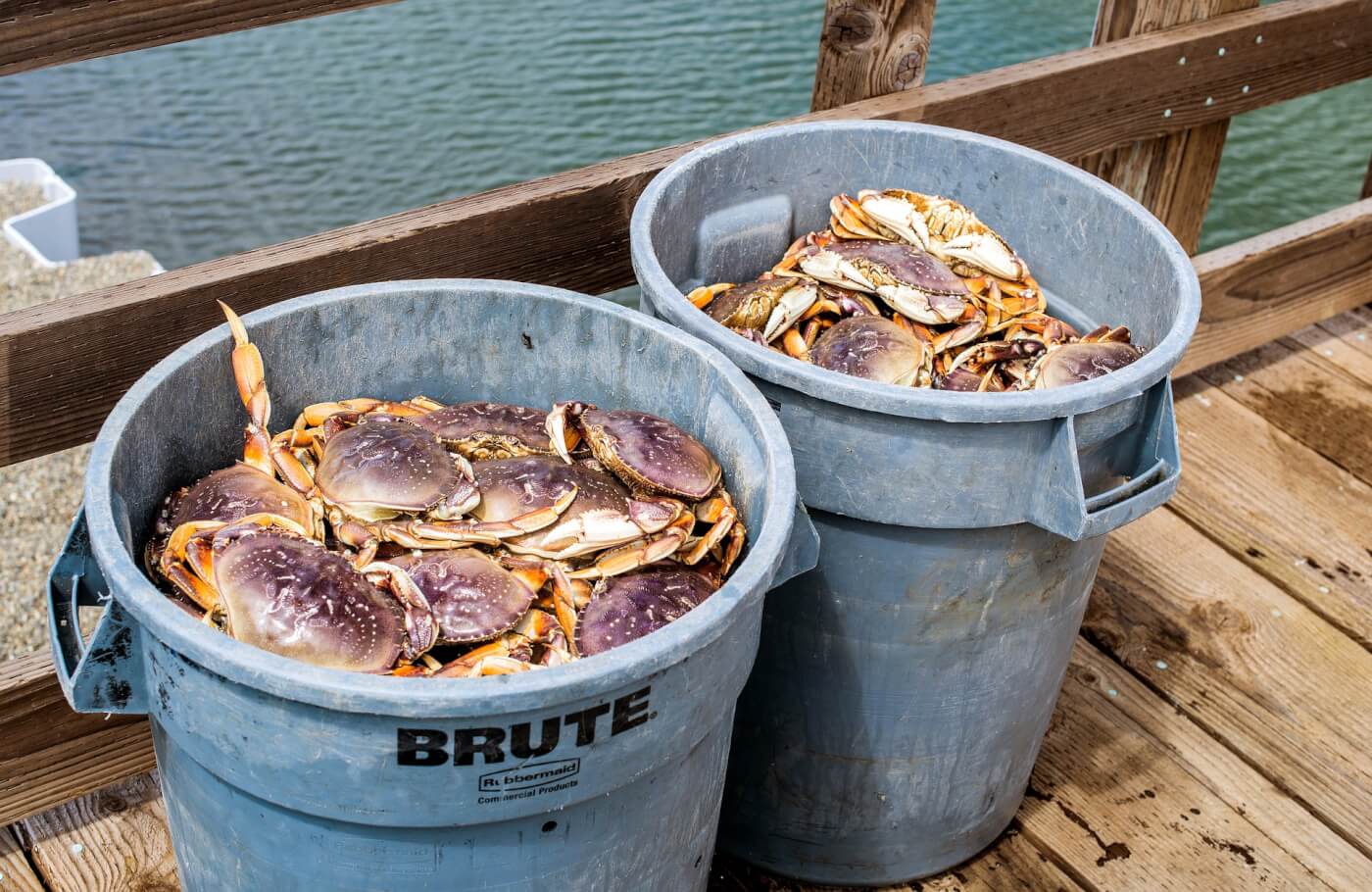 Humans often cook Dungeness crabs alive by dropping them into boiling water. Humans’ justification for boiling crabs alive is that once they die, their flesh immediately starts to rot and become toxic. Occasionally, chefs kill them just before cooking by inserting a sharp knife or screwdriver into their nerve centers. This is also a painful process, since the nerve bundles are extremely sensitive. There is no humane way to kill a crab. Once they’re dead and cooked, their flesh is pulled from their claws, legs, and bodies.

King crabs are large animals who can weigh up to 25 pounds. Only a quarter of their body is eaten by humans—mostly their claws and legs. These remarkable animals use their legs to migrate each year and can walk up to 100 miles along the ocean floor, traveling a mile each day. Humans tear their legs and claws off before pulling the flesh from their broken exoskeletons. 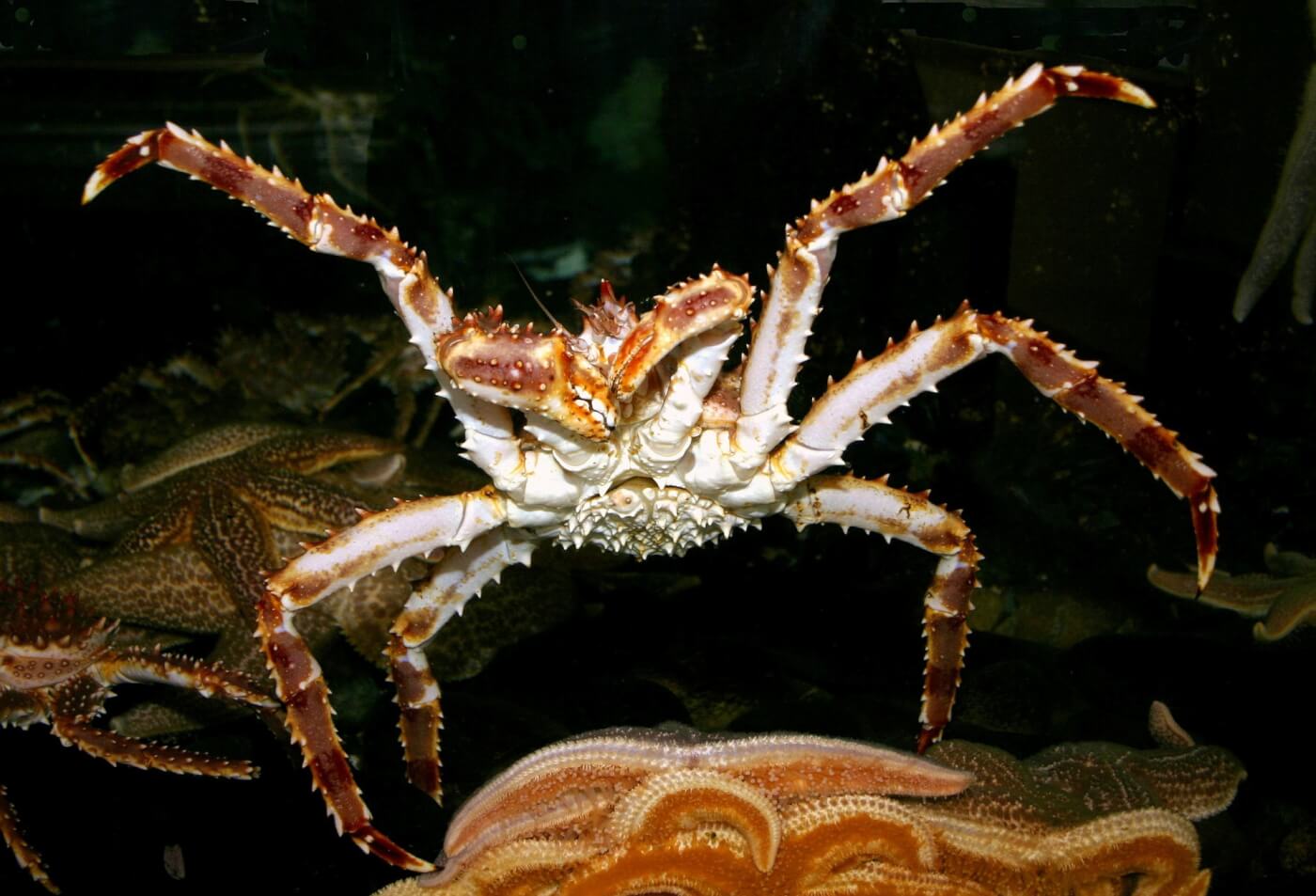 In the Florida stone crab industry, only the claws of stone crabs are sold to be eaten by humans. This “prized delicacy” comes at the expense of these sensitive animals—in a PETA video, an eyewitness documented that workers tore off their claws and tossed the animals back into the sea. Removing even one claw compromises crabs’ ability to defend themselves against predators and find food, but fishers often take both claws. Many crabs bleed out. One study found that approximately 41% of stone crabs died when one claw was torn off and that nearly two-thirds died when both claws were removed. Other marine animals also suffer in this industry. PETA’s investigation found that a worker killed several fish with a hammer so their body parts could be used as bait. Another worker repeatedly slammed a shark against the side of a boat and apparently carved off chunks of the animal’s flesh to use as bait.

Horseshoe crabs are fascinating and resilient animals. They’re known as “living fossils” because evidence of their existence has been found from at least 445 million years ago. They are also not technically crabs and are actually more closely related to spiders. 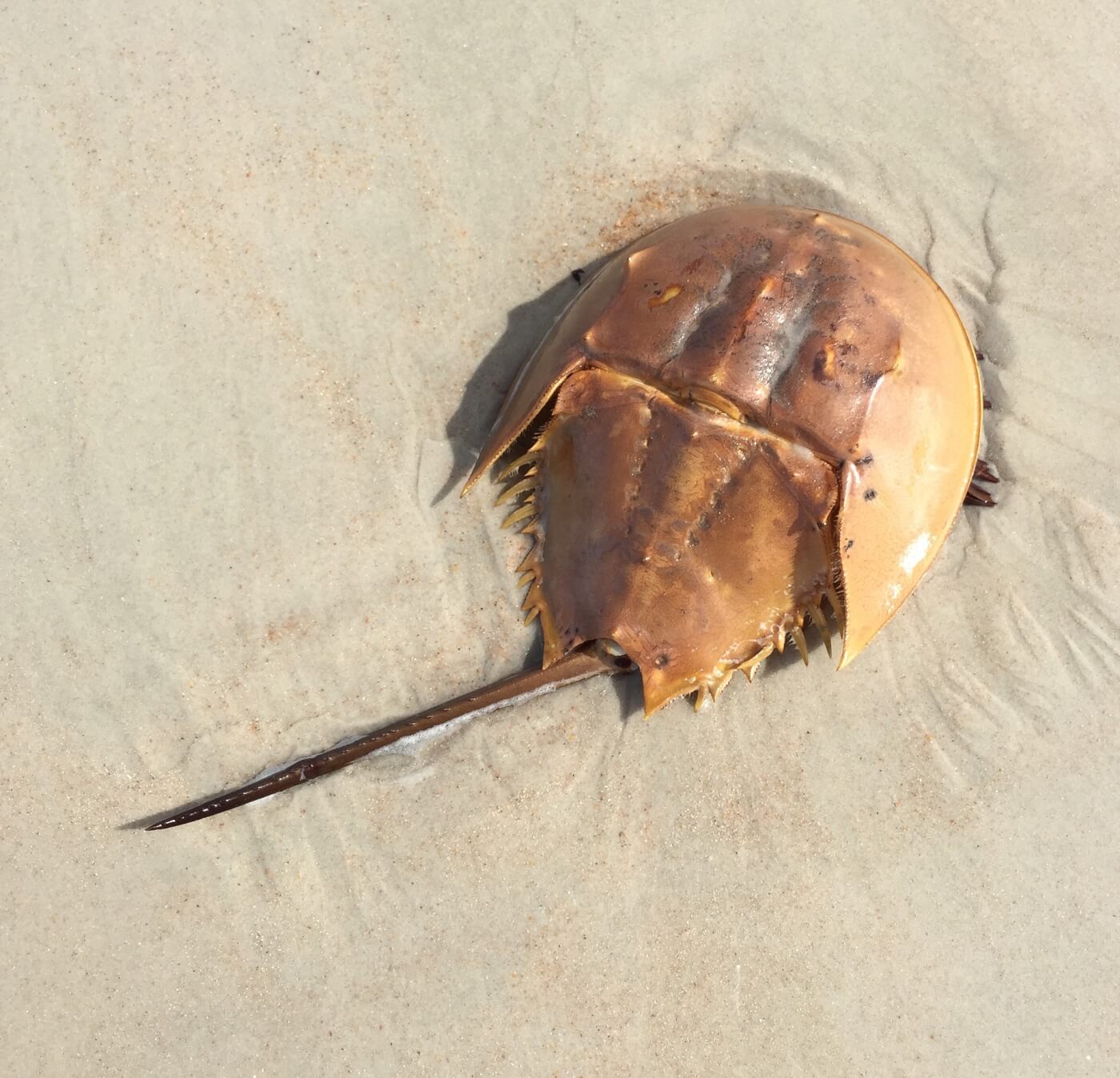 Typically, only horseshoe crabs’ eggs are eaten by humans. They’re more commonly exploited for their blue blood, which the pharmaceutical industry uses to test for contaminants in vaccines and medical devices. In laboratories, the crabs are bled alive, and if they survive the process and are released, they often struggle to recover and reproduce. As a result, horseshoe crab populations along the Atlantic Coast are experiencing serious declines that have had cascading negative effects throughout the ecosystem—including on birds who rely on horseshoe crab eggs for sustenance during long migrations. After surviving for hundreds of millions of years, through mass species extinctions and ice ages, horseshoe crabs are now in danger of extinction just because humans want their blood.

Also known as sand crabs, mud crabs, or rock crabs, peekytoe crabs were considered a throwaway byproduct of the lobster industry—until a seafood company changed their name and began persuading restaurants to sell their bodies. Now humans pay top dollar for the flesh beneath these crabs’ shells. Instead of enjoying their lives in the sea and sand, peekytoe crabs are trapped in cages to be killed, picked apart, and eaten. 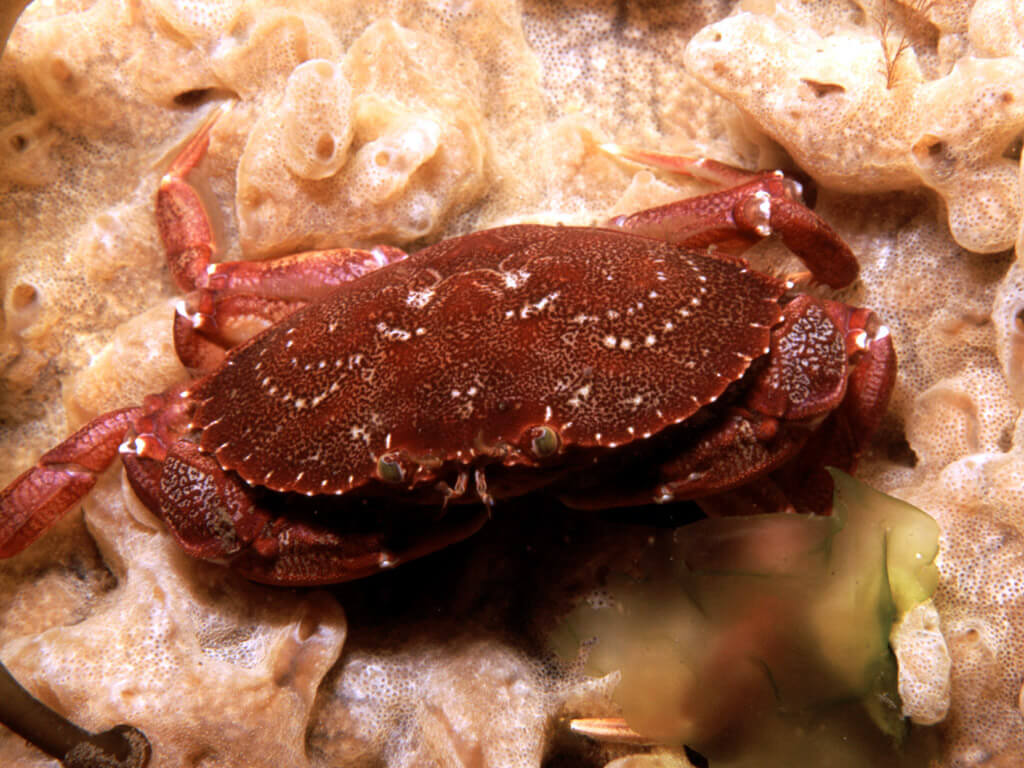 Spider crabs have the largest leg spans of all the arthropods, reaching up to 12 feet from claw to claw. They are known to be “gentle giants” who have calm personalities, only using their claws defensively or to find food. Despite being one of the most difficult crabs to kill and cook because of their massive size, spider crabs are still eaten by humans. 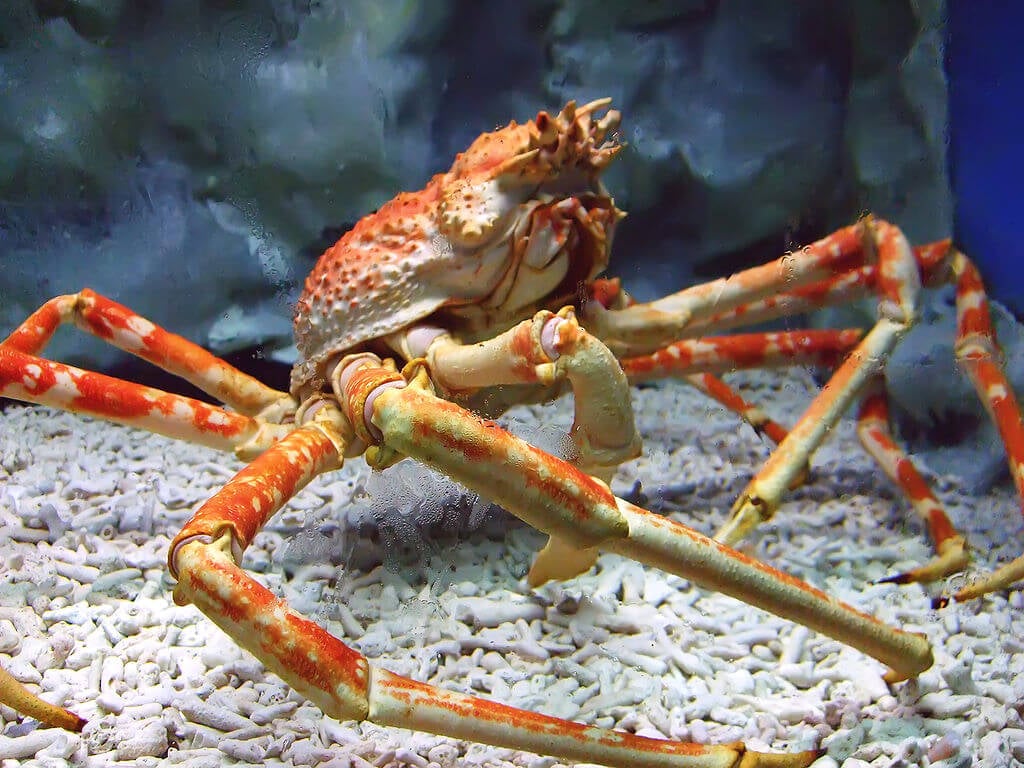 This is not a distinct species of crab but a term for crabs who have recently molted, so their new exoskeletons have not yet hardened. In North America, soft-shell crabs are most commonly blue crabs. Because the exoskeleton is soft, humans cook and eat the entire body, except for the gills, mouthpart, and abdomen.

Just like all animals, crabs experience pain and fear. There is no humane way to eat or use a crab of any species. The best thing you can do to help these animals is to go vegan and leave them and all other sea animals off your plate. These vegan crab recipes will help you make the change (psst … Old Bay Seasoning is vegan!):

13 Vegan Crab Recipes to Serve Up This Summer

Take action for stone crabs and other sea animals: 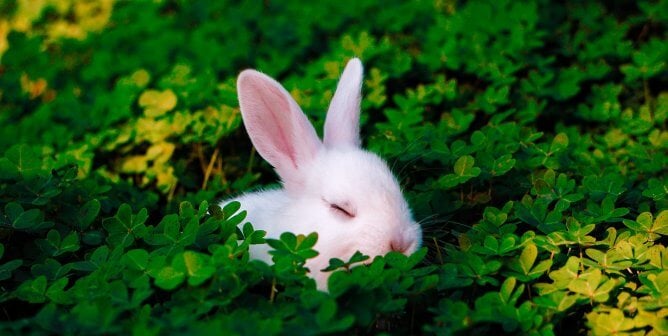