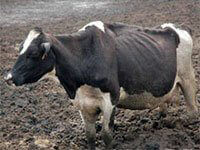 California’s dairy cows are crammed into huge lots, where they live covered in mud and their own feces for most of their miserable lives. They are pumped full of drugs to keep them producing such unnatural amounts of milk that their udders often become swollen and infected—in fact, at any given time, roughly one-third of California’s cows suffer from painful udder infections, and more than half suffer from other painful infections and illnesses. They are forcefully impregnated every year to keep them producing milk, and their male babies often end up chained by their necks in veal crates before being slaughtered at just 16 weeks old.

More than a fourth of California’s dairy cows are slaughtered each year, generally because they’ve become crippled from painful foot infections or calcium depletion. At this point, they are trucked to the slaughterhouse through all weather extremes, many collapsing and arriving crippled. Slaughter is gruesome and often terrifying and painful. Said one former USDA slaughter inspector, “In the summertime, when it’s 90, 95 degrees, they’re transporting cattle from 1,200 to 1,500 miles away on a trailer, 40 to 45 head crammed in there, and some collapse from heat exhaustion. This past winter, we had minus-50-degree weather with the windchill. Can you imagine if you were in the back of a trailer that’s open, and the windchill factor is minus 50 degrees, and that trailer is going 50 to 60 miles an hour? The animals are urinating and defecating right in the trailers, and after a while, it’s going to freeze, and their hooves are right in it. If they go down—well, you can imagine lying in there for 10 hours on a trip.”

The one thing that the “Happy Cows” ads get right is that cows do have the same capacity for happiness as any dog or cat. In fact, cows are interesting and intelligent individuals who form complex social relationships, recognize one another, and enjoy an array of activities, including problem-solving. When describing the pleasure of a cow who has just overcome an intellectual challenge, researcher Cambridge University’s Dr. Donald Broom says, “The brainwaves showed their excitement; their heartbeat went up and some even jumped into the air. We called it their Eureka moment.”

How can the CMAB get away with lying to consumers? The CMAB is the marketing arm of the California Department of Agriculture, a government agency, and in California, remarkably, government agencies are exempt from false-advertising laws. Do happy cows come from California? You decide.