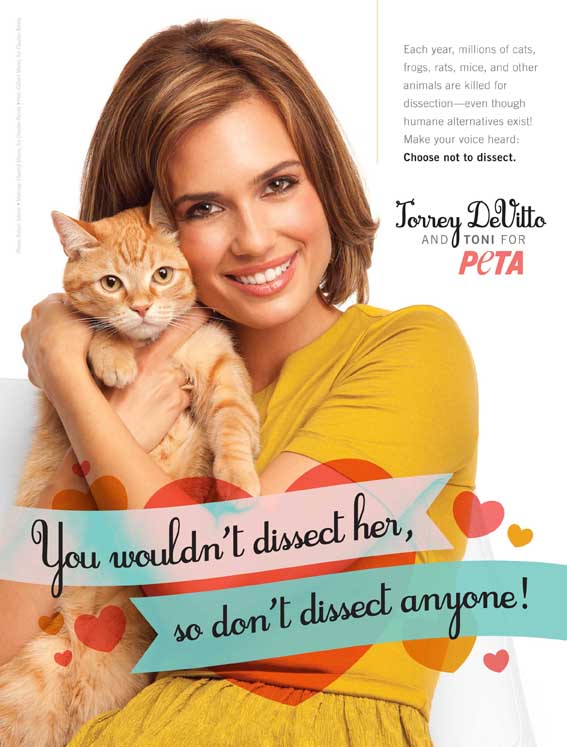 Actor Torrey DeVitto has an important message for students everywhere: When it comes to animal dissection, you have a choice. Torrey already speaks to teenagers through her roles on ABC Family’s Pretty Little Liars and The CW’s The Vampire Diaries, but now she’s playing a huge role for animals and asking students, If you wouldn’t dissect your companion animal, then why would you dissect any animal?

Many students go along with this cruel practice because they aren’t aware that they have a choice. Torrey felt the same way, saying, “The whole thing just seemed so wrong and so creepy, but I didn’t think I had an option.” Now, there are wonderful modern-day alternatives to dissection for those who are morally opposed to cutting up dead animals who suffered greatly before their carcasses reached the classrooms. Most animals killed for dissection live in filthy, cramped conditions until the day they die for classroom experiments. Not only does virtual dissection save animals, it also saves schools money and helps the environment by sparing the use of toxic chemicals typically used to embalm animals.

In Torrey’s ad for PETA, she is holding an adorable adopted kitty to encourage students to exercise their right to say no to dissection and to choose virtual dissection instead:

Stand up for your right not to dissect and learn even more by asking your teacher about virtual dissection. View your cruelty-free dissection options by opening the notebook below: