A superhero’s job is to protect people from those intent on causing harm. So what happens when an entire population’s suffering is legal and the “good guys” are those breaking the law? A 1990 Spider-Man comic, titled “Liberty and Justice for All” (in Marvel Comics Presents #39)—or, as the back cover aptly phrases it, “The Amazing Spider-Man vs. Vivisectionists”—addresses this very issue and shows that Spidey is unafraid to take action for all people, regardless of species.

When Spider-Man gets word that criminals are stealing from a university, he’s outraged. However, he’s in for a shock when the “crooks” turn out to be students intent on liberating animals the university planned to torment in cruel experiments.

Spider-Man: Haven’t you heard? It’s not nice to steal from the university! Student 1: Hurry Up! Spider-Man: I float through the air with the greatest of ease… Student 2: Start the van! Let’s go!

The students explain that dyes and chemicals will be applied to rabbits’ sensitive eyes to test cosmetics and that a monkey’s head will repeatedly be bashed to test the limits of head trauma. 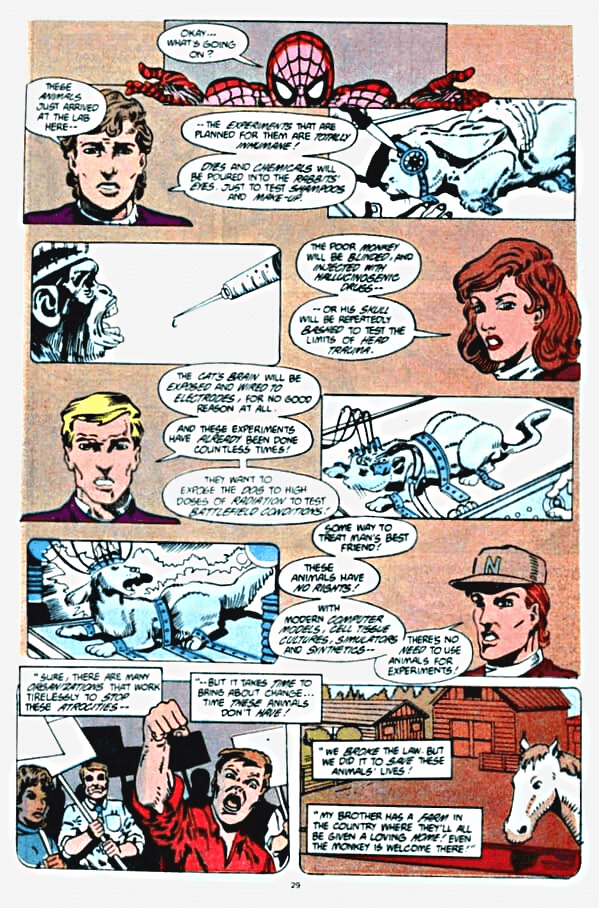 Spider-Man: Okay… What’s going on? Student 1: These animals just arrived at the lab here. The experiments that are planned for them are totally inhumane! Dyes and chemicals will be poured into the rabbits’ eyes. Just to test shampoos and make-up. Student 2: The poor monkey will be blinded and injected with hallucinogenic drugs or his skull will be repeatedly banged to test the limits of head trauma. Student 3: The cats brain will be exposed and wired to electrodes, for no good reason at all. And these experiments have already been done countless times! They want to expose the dog to high doses of radiation to test battlefield conditions! Student 4: Some way to treat man’s best friend! These animals have no rights! With modern computer models, cell tissue cultures, simulators and synthetics… there’s no need to use animals for experiments!

Moved by the animals’ plight, Spider-Man has a difficult choice: uphold the law or allow the students to escape with the animals. With only moments to decide, he accepts the students’ ethical argument and allows them to free the animals. Spidey acknowledges that while he failed to capture the “crooks,” he has never felt better in his life.

Although the scenario in “Liberty and Justice for All” is obviously fictional, the experiments that the students prevent the animals from being used in are, of course, based on reality. More than 161,000 rabbits are tormented in laboratories every year, and many of them are subjected to the Draize eye irritancy test described in the comic, in which substances—such as personal-care products, household cleaning products, or their ingredients—are applied to their eyes, often causing redness, swelling, discharge, and sometimes blindness. After the tests, the rabbits are either killed or subjected to more experiments, despite the availability of humane and effective animal-free methods.

Monkeys also suffer in university laboratories. For example, experimenters led by Agnès Lacreuse perform invasive surgeries on female marmosets at the University of Massachusetts–Amherst (UMass), implanting electrodes in holes that they drill into the animals’ skulls. Then they cut into their necks and thread electrode leads from their scalp and neck through their abdomen. The marmosets are routinely zip-tied into a restraining device to immobilize them, and then they are shoved into a plastic cylinder that’s screwed in place and are subjected to the noise of an MRI machine. It’s a frightening and confusing experience. In some tests, these sensitive, social animals are left in solitary confinement—which United Nations officials have compared to torture when it’s done to humans—just to see how they react.

Do You Want to Defend the Rights of All, Like Spider-Man? Read Free the Animals

We can’t all be superheroes like Spider-Man, but we can all be heroes to animals who are suffering in laboratories. For the story of a real-life hero, check out Free the Animals by PETA President Ingrid Newkirk. In the book, “Valerie”—a young woman on the cusp of a promising career in law enforcement—changes her life when she witnesses the abuse of animals in laboratories. Like Spider-Man, Valerie finds her world turned upside down when she learns that abiding by the law is not always the ethically sound choice. She decides that if no one else is going to help free the animals from abuse, she will.

If comics aren’t your thing or you’re just looking for your next book, pre-order Free the Animals today:

Order Your Copy of ‘Free the Animals’ Today