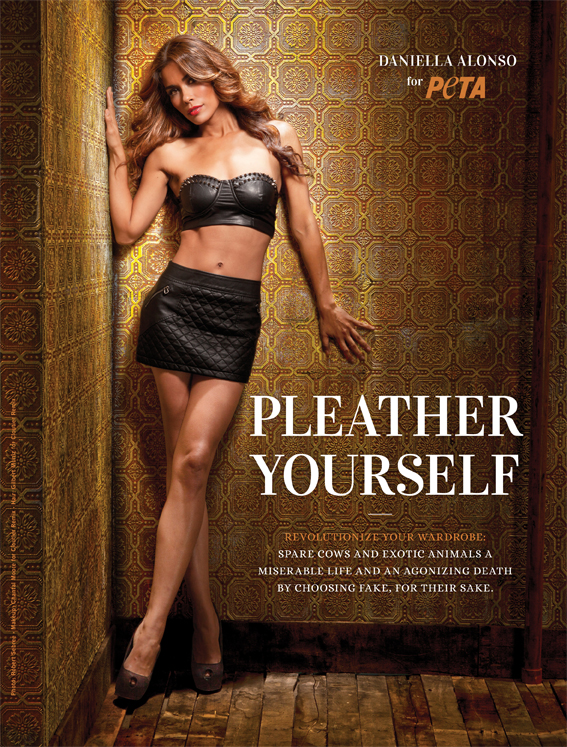 Actor Daniella Alonso proves that dressing cruelty-free is stylish and sexy in her seductive PETA ad asking people to choose fake for animals’ sake. Daniella starred as Nora, a rebel fighter battling the militia in NBC’s Revolution, and now she’s taking on cruelty to animals by starring in this smoldering PETA ad!

Leather can be made from cows, pigs, goats, and sheep; exotic animals such as alligators, ostriches, and kangaroos; and even dogs and cats, who are slaughtered for their meat and skin in China, which exports their skins around the world. Because leather is normally not labeled, you never really know where (or whom) it came from.

In the U.S., many of the millions of cows and other animals who are killed for their skins endure the horrors of factory farming, which include extreme crowding and deprivation as well as castration, branding, tail-docking, and dehorning—all without being given any painkillers. At slaughterhouses, animals routinely have their throats cut and are dismembered while they are still conscious.

Compassion is always in fashion, and having a heart is easier than ever. With vegan clothes, shoes, handbags, and accessories in high demand, both major fashion houses and everyday retailers are jumping on board the skins-free trend, making items easily accessible.

Check out this exclusive behind-the-scenes video and interview from Daniella’s sexy photo shoot:

For every stitch of leather or exotic-animal skin, animals endured an agonizing life and a painful death. Join Daniella in revolutionizing your wardrobe and pledge to choose fake for animals’ sake! 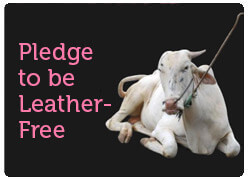