Peeling Off an Animal’s Skin Is Entirely About Greed.

Studies show that buying luxury items satisfies some people’s desires to be associated with an elite group. But owning products made from animals doesn’t elevate consumers to a higher social status—it just demonstrates that they support industries that abuse, enslave, and kill animals.

For years, companies have known that consumers associate high prices with high quality. It’s the reason why many people believe (often falsely) that expensive wine tastes better or that “we get what we pay for.” Companies know that by slapping a high price tag and a “luxury” label on a filthy, disgusting process, people will think that they’re buying something of value.

Here’s what happens so that consumers can purchase expensive, “luxury”, animal-derived products: Workers in animal-abusing industries raise animals, slaughter them in bloody and often painful ways, hack them into pieces or peel off their skin – often while they’re still conscious – treat that skin with cancer-causing chemicals that harm people and the planet, and then transport the animal’s petrified carcass or body parts to a factory. There, what was once a living being is turned into an item that folks will use for a short time before vanity kicks in and prompts them to support the process all over again.

Does This Really Sound Luxurious?

Companies such as Hermès and Prada create some of the world’s most expensive and well-known fashion accessories made from exotic skins, yet consumers have little idea of how much deprivation, blood, slaughter, and environmental damage is involved in manufacturing such items. If they saw firsthand that countless animals are bludgeoned and electrocuted to make coats and handbags every year, they would lose their lunch.

Consumers who buy into the prestige of a particular handbag or pair of shoes are being duped by marketers. There’s nothing luxurious about keeping alligators in putrid water-filled pits in dark sheds, without sunshine, fresh air, or clean water. PETA exposés of the exotic-skins industry have found sensitive living beings crammed into filthy pits, hacked apart, and left to die slowly.

As PETA’s recent video exposé shows, crocodiles on one farm in Vietnam – which has supplied skins to Louis Vuitton – were living in filthy, tiny concrete pits narrower than the length of their bodies. At another farm, it was found that workers hacked into crocodiles’ necks and rammed metal rods down their spines as blood poured from the wounds, all so that brands could make a profit from selling their skin. Experts have found that these animals remain conscious for more than an hour after their spinal cords have been severed and their blood vessels cut.

In South Africa, hundreds of thousands of ostriches are slaughtered every year for their skin, feathers, and meat. PETA eyewitnesses reported that workers forcibly pushed ostriches onto the kill floor and that many birds slipped and fell as they were manhandled into a stun box. After the animals were stunned by an electric shock to the head, their throats were then cut and a knife was stuck into their chests to facilitate bleed-out. Often, the birds next in line were able to see their flockmates be killed. 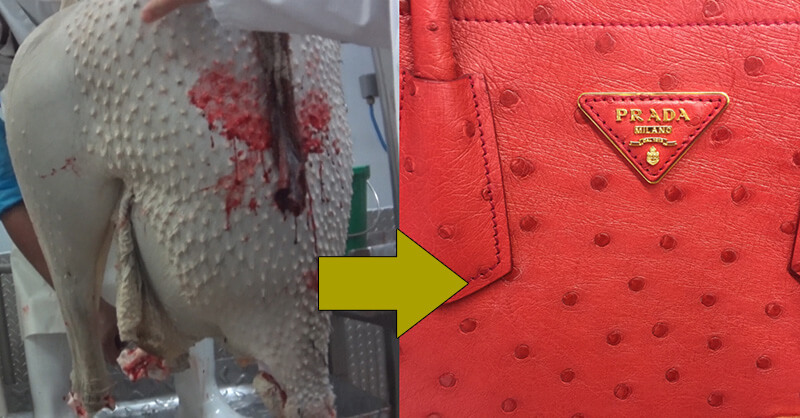 In the leather industry, the expensive price tags of designer items hide the fact that standard practices worldwide include tearing calves away from their mothers, painful branding and ear-tagging, beatings, electroshocks, and violent, painful killing methods. Today, there are a variety of vegan leathers that are easy to clean, soft to the touch, resistant to spills, and more environmentally friendly than animal-derived leather.

In order to produce fur coats, trims, collars, and accessories, millions of animals are confined to cramped, filthy cages before being beaten to death, strangled, electrocuted, and even skinned alive. If they die before they can be slaughtered, their terrified, stressed, and often starving cagemates may eat their bodies in a desperate attempt to stay alive.

The conditions that animals endure in such facilities are atrocious. On a chinchilla fur farm in Vista, California, which PETA helped shut down, one of the owners admitted to splinting animals’ broken bones herself, in addition to amputating their limbs with wire cutters, using six drops of brandy as an anesthetic.

How Elegant Are Feces, Maggots, and Fish’s Guts?

If luxury dining is supposed to be clean, fresh, and elegant, high-priced products such as foie gras and caviar don’t make the cut.

A worker at Hudson Valley Foie Gras (then known as Commonwealth Enterprises) told a PETA eyewitness that he could feel tumor-like lumps, caused by force-feeding, in some ducks’ throats. One duck had a maggot-covered neck wound that was so severe that water spilled out of it when he drank. Workers routinely carried birds by their necks, causing them to choke and defecate in distress. 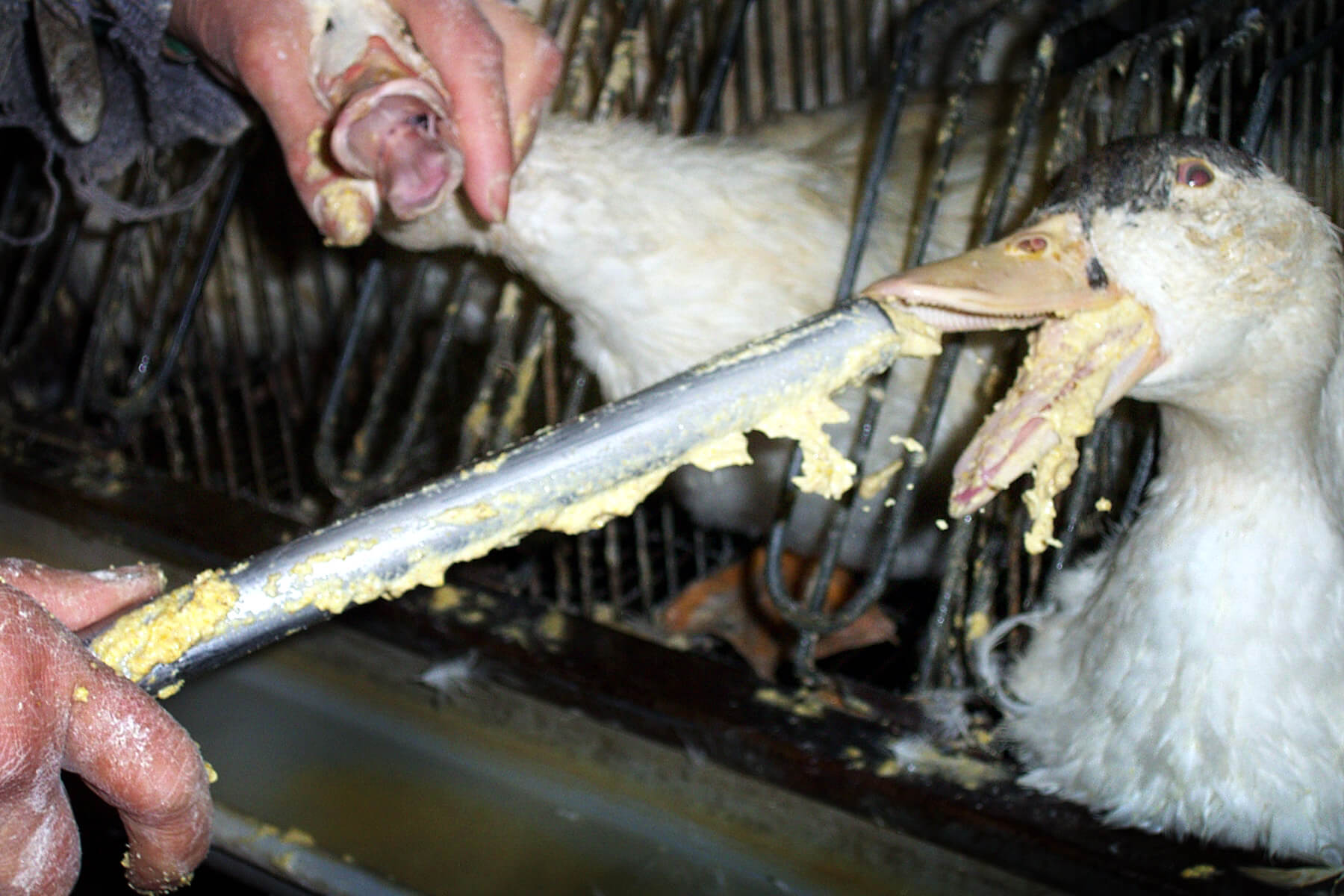 Many producers of foie gras boost their profits by also selling the feathers of birds on their farms. Ducks and geese who are live-plucked often sustain gaping, bloody wounds because their feathers are yanked out so forcefully. 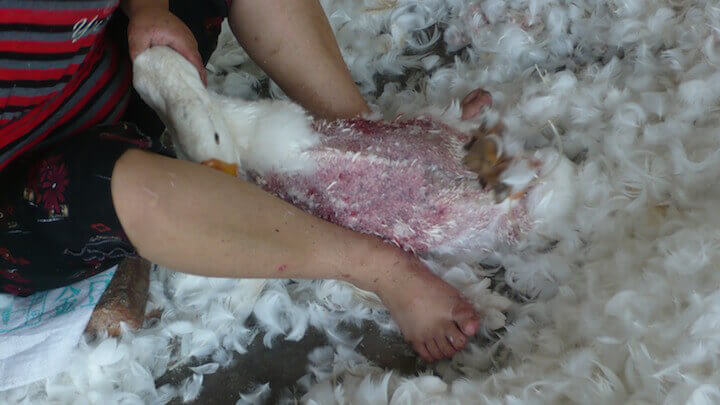 As overfishing has decimated sturgeon populations, caviar producers around the world have switched to industrialized aquaculture farms. These facilities, which are often filthy, keep sturgeons trapped inside enclosures in which they have no choice but to swim through their own waste and are exposed to rampant diseases. Females are sometimes cut open while they’re still alive so that their eggs can be ripped from their ovaries.

Help Us Expose the Luxury Lie.

In the 21st century, it’s easy for consumers to find fashionable, comfortable, warm clothing and accessories without wearing an animal’s skin or fur. Likewise, eating foods from animals is 100% unnecessary.

When you buy an animal-derived product—no matter the brand—you’re supporting an industry that subjects living, feeling beings to a miserable life and a violent death. Each year, millions of animals are killed for the clothing and food industries, and it’s up to consumers to end this needless violence by choosing stylish, animal-free clothing and by going vegan today.