Not only is PETA the largest animal advocacy organization in the world, it’s also the most engaged-with advocacy organization on social media, period—and that includes groups that focus on non-animal causes. We have the highest number of people liking, sharing, and commenting on our Facebook posts, tweets, and Instagram pictures.

This means that more people than ever are getting the message to go vegan. Here’s a look at some of our social media work in the first half of 2016 that’s inspired audiences to live more compassionately.

We published a combined total of almost 500 Facebook posts related exclusively to vegan eating and the treatment of animals raised and killed for food on our PETA, peta2, and PETA Latino Facebook pages.

Our “Chicken Dinner in Reverse” video, which shows the truth about where a chicken dinner comes from, was shared 151,500 times and received 15 million views—on our main Facebook account alone.

Our moving “The Year of Vegan” video shows one person’s journey toward going vegan. It follows the transition that a young woman slowly makes over the course of a year, beginning with Googling how to go vegan and ending with helping her mother start her own vegan journey. The hit video received over 1.9 million views.

Using the Paul McCartney–narrated video “Glass Walls,” we created this video about pigs in the farming industry, which received over 1 million views.

This short video, which shows newborn male chicks—who are discarded by the egg industry—as they’re tossed onto a slaughter truck, was viewed over 700,000 times.

We published over 3,000 tweets related to vegan eating and animals raised for food on our PETA, peta2, and PETA Latino Twitter accounts, totaling 45 million impressions.

One of the most exciting moments came during the Super Bowl, when “PETA” trended on Twitter after our tweets about chicken wings went viral. 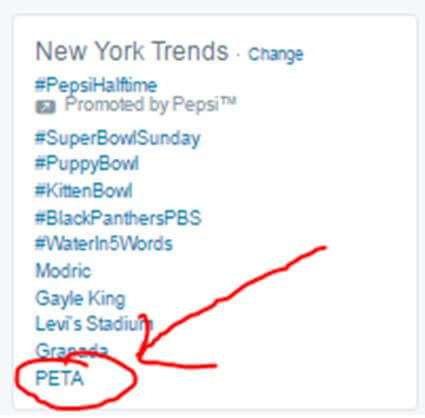 One tweet from someone who shared our “Chicken Dinner in Reverse” video, along with some simple commentary, received over 50,000 retweets. 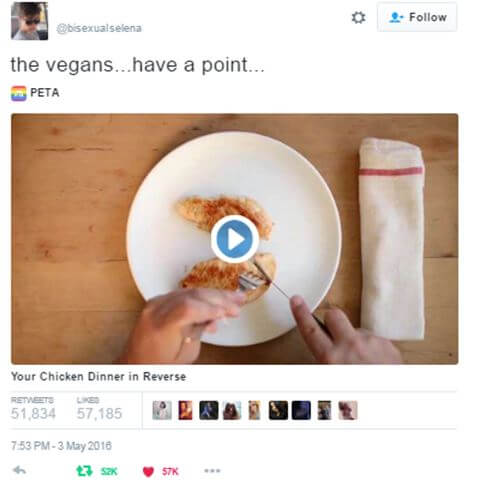 On Facebook and Twitter, our staff works seven days a week to respond to the many questions and comments about eating vegan, including this one: 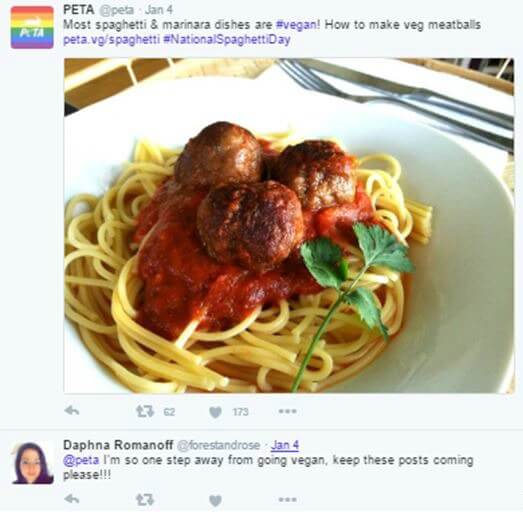 A PETA social media correspondent responded to this woman within an hour, providing encouragement and a link to more resources. 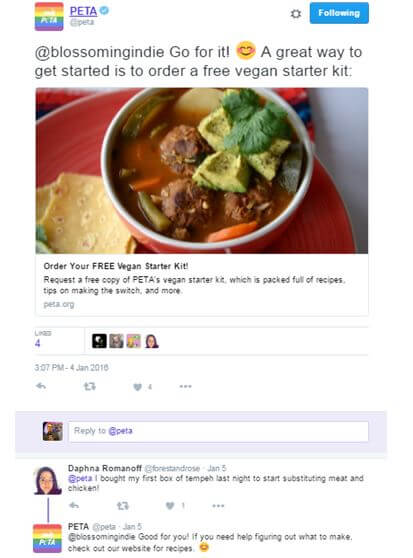 We published over 350 posts related to vegan eating on our PETA, peta2, and PETA Latino Instagram pages, for a total of 833,000 likes.

Our biggest hit was a PETA Living recipe video for vegan chocolate crème eggs around Easter, which received over 108,000 views.

Across all social media platforms, including YouTube, our vegan-related videos received 104 million views. Vegan recipe videos have been one of our most popular endeavors this year. Our video series that shows viewers the incredible possibilities of vegan food has already racked up over 18 million views. 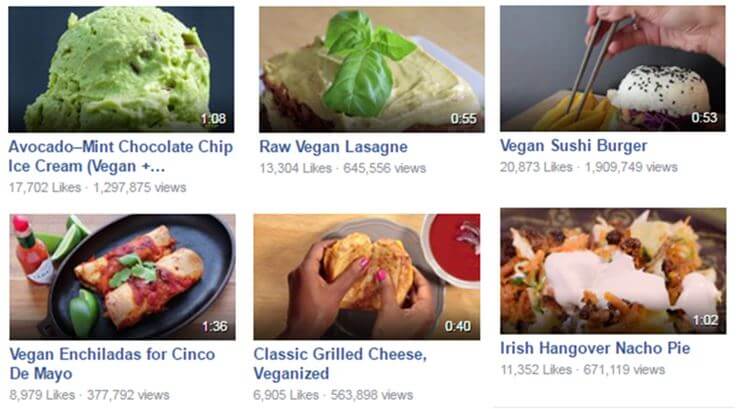 Also popular is our “… in 60 Seconds Flat” video series, which we launched with “Factory Farming in 60 Seconds Flat” a few years ago. We’ve created videos for many topics in the past couple years, including foie gras, bacon, the dairy industry, chicken, and cheese. “El Pollo en Exactamente 60 Segundos,” for instance, received half a million views in March on our PETA Latino Facebook page.

PETA is known for partnering with celebrities. One of our most popular celebrity videos related to eating vegan is our “Face Your Food” video featuring Peter Dinklage. Our latest promotion of the video, which was timed with the premiere of the latest season of Game of Thrones, received 849,000 views on our main PETA page alone.

On all our pro-vegan social media posts, we follow up with a comment that provides a link to our vegan starter kits or other resources to help people make personal changes to help animals.