What is the secret to a viral Facebook post? We’re not sure if we’ve cracked the code, but the following posts really got people’s attention and started countless conversations about animal rights issues—and probably saved some lives:

When Australian musician Jona Weinhofen showed us what sheep really look like after they’re sheared, a lot of people couldn’t keep their cool.

Nor should they. This post about something that is so wrong went viral for the all the right reasons. Even though the sheep pictured wasn’t real (it’s a prop!), many sheep are injured like this when they get sheared. People were in disbelief, and they told us so in the comments:

It’s not the sheep who are sick—it’s the people who do this to them, and it has everything to do with shearing. The good news is that we have the cure: Go vegan.

When we shared our investigation about pigs tortured in military training, some people couldn’t even look.

New PETA investigation of military training shows pigs being SHOT in the face & cut open.Some of the animals start to regain consciousness while they're cut open :([Warning: GRAPHIC]

Posted by PETA (People for the Ethical Treatment of Animals) on Tuesday, June 9, 2015

Despite (or maybe because of) its graphic content, this post reached a lot of people, even though some couldn’t bring themselves to watch the video:

Remember: It’s important to share graphic images. It may make you uncomfortable to look at them, but it’s nothing compared to what animals endure on a daily basis.

When we posted this video about dog leather, even Facebook couldn’t handle it:

The video was so horrific, Facebook posted a warning before it, which maybe deterred some viewers. The title alone shocked people. Many couldn’t bear to watch:

And those who did watch it were very upset:

Those who shared the video helped blow the whistle on this cruel trade and opened many people’s eyes to where leather comes from.

When we posted about the Yulin dog-meat festival in China, people were outraged.

They look just like any of your neighbors’ dogs or cats 🙁

Posted by PETA (People for the Ethical Treatment of Animals) on Monday, June 22, 2015

But this also started an interesting conversation in the comment section about why we care so much about animals we deem as “pets” but accept the abuse of other animals for food and clothing. 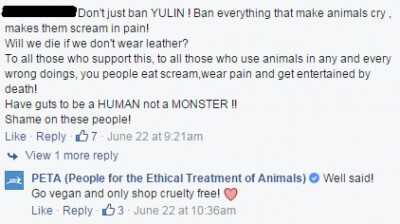 A lot of people called for compassion for all animals, not just dogs.

Any time compassionate people choose to strip down to raise awareness, the Internet goes crazy.

These famous dudes are showing off in a big way 😉

Posted by PETA (People for the Ethical Treatment of Animals) on Monday, June 1, 2015

Some people made jokes:

But a lot of people got the full monty, er, picture:

We’re all for anything people do—whether clothed or not—to get the word out about helping animals.

A post about laboratory employees who were caught on tape abusing animals ignited fury.

A LOT of fury: 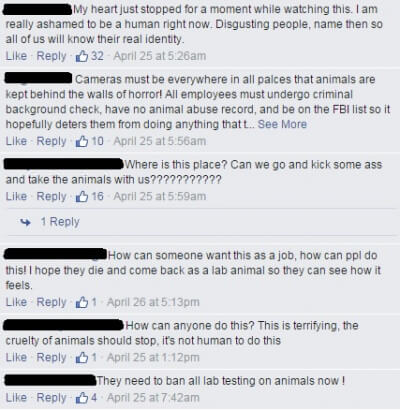 This post reached about 2 million people. That’s a lot of people who were able to see how animals are abused in laboratories, and a lot of important conversations were started.

Think catch-and-release is better?Look what happens to the fish AFTER they're returned to the water…

Posted by PETA (People for the Ethical Treatment of Animals) on Tuesday, April 28, 2015

This resonated with a lot of people who remembered the trauma of fishing as children:

It turns out, people could handle the truth:

This was a good conversation starter about how fish, like all animals, can feel pain.

When we shared this risqué PETA.org article, we knew people would have a lot to say:

#VEGANS DO IT BETTER.And they last longer?!

Posted by PETA (People for the Ethical Treatment of Animals) on Saturday, April 25, 2015

Like this person, who laughed in spite of herself:

Or this person, who was beginning to see the light, thanks to the post:

Or this person, who knew exactly what we were “up” to:

In the age of social media, the power to effect change is at our fingertips. Every PETA post that you share educates, inspires, raises awareness, changes minds, and helps animals more than you ever imagined.