Fun-loving Matt Judon might be best known to his fans for his creative sack celebrations and awesome father-daughter dance videos, but those who know the New England Patriots linebacker best know that his towering frame comes with a huge heart to match. He has given cancer patients a day of pampering and joined the fight against sex trafficking, and now he’s putting his (considerable) muscle into helping animals, too.

In his new public service announcement for PETA, he manages to tackle a serious subject in his classic comedic style:

His New England accent may still need some practice, but his lifesaving message is spot-on.

Kept out of sight and out of mind in the backyard, many chained dogs have only a flimsy “shelter” such as a trash bin or plastic barrel, which does nothing to protect them from bitterly cold temperatures, biting winds, and snow and ice. Others are given no shelter at all. Countless dogs left outside to face the harsh winter weather have frozen to death, an extremely cruel fate for “man’s best friend.” 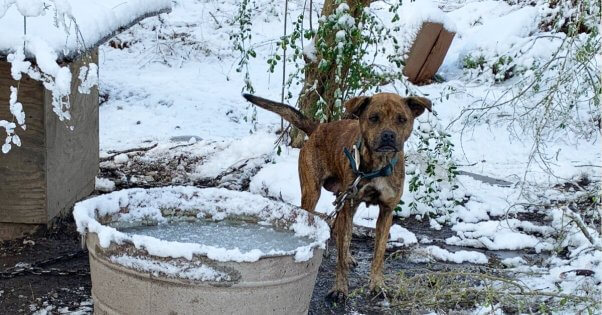 These discarded dogs are often also deprived of other basic necessities, including adequate food, clean water, and veterinary care. Unable to escape from danger, they’re at risk of being attacked by other animals or abused by unkind humans. And the emotional and social needs of these pack animals—who long for companionship—are completely ignored.

PETA urges Pats fans and dog guardians everywhere to take Matt’s advice: “My dogs are part of my family, and I would never leave my family outside. So bring your dogs inside and show them the love and respect that they show you.”

Watch ‘Breaking the Chain’ for Free on Prime Video

Sponsor a Doghouse for an Animal in Need