Kevin McHale knows how it feels to be the underdog when he’s playing Artie Abrams on Fox’s hit series Glee. So it isn’t hard to understand why he’s rooting for all underdogs in his new ad with PETA, which features his adopted pooch, Sophie, and was shot by celebrity photographer Jack Guy. 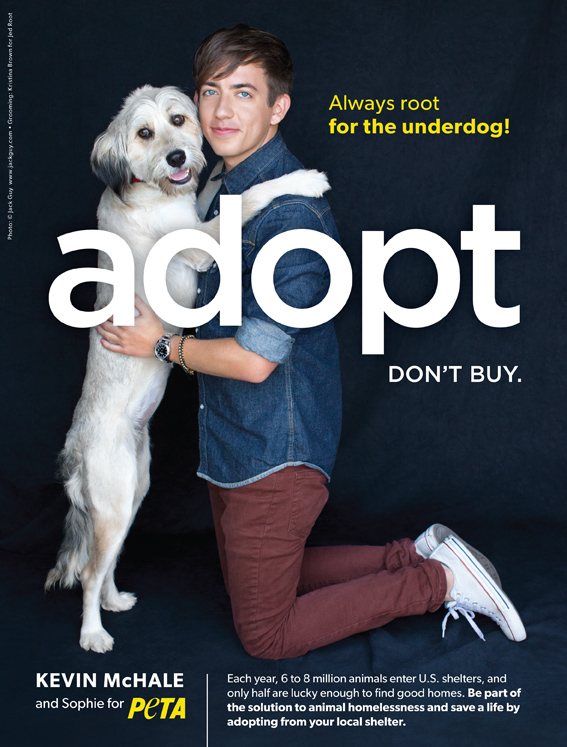 Six to 8 million cats and dogs enter U.S. animal shelters every year, half of whom must be euthanized simply because of a lack of good homes. Countless others who never make it to a safe haven succumb to starvation, disease, weather extremes, traffic, and even cruel people on the streets.

With advice from his friends and fellow cast members of Glee, adopting Sophie from a shelter was a no-brainer because every animal purchased from a pet store or a breeder means a death sentence for an animal sitting in a shelter, desperately hoping for a good home. Join Kevin and Sophie in being part of the campaign to end animal homelessness by making sure that your animal companions are spayed or neutered and adopting—never buying—animals.

Check out Kevin’s exclusive interview behind the scenes at his PETA photo shoot:

Check out two different versions of Kevin and Sophie’s ad here and here.

Help save a life by sharing this message on Twitter!

See who else is helping animals with the #adoptdontbuy hashtag.