British soul singer Joss Stone—a lifelong vegetarian—has never eaten an animal, and she even sang “Amazing Grace” to cows as a child. With a deep-rooted
respect for animals, it’s not surprising that she joined PETA’s campaign urging consumers to leave wildlife out of their wardrobes. 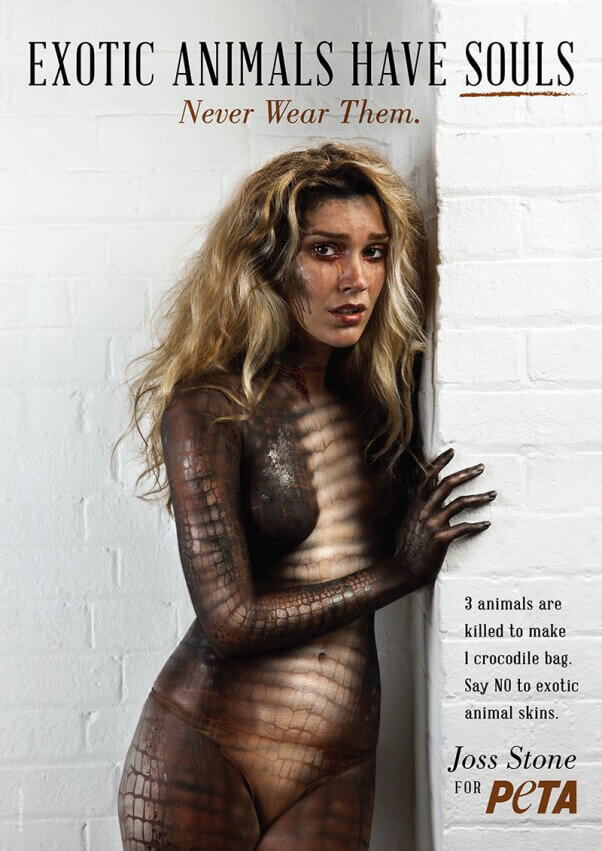 Millions of reptiles are slaughtered each year and turned into shoes, handbags, belts, and other accessories. The horrors behind the handbags sold by “luxury” brand Hermès were exposed by PETA investigations of the company’s exotic-skins suppliers, which showed that workers crudely hacked into the necks of some alligators and that crocodiles were crowded into barren concrete pits for months or even years before finally being slaughtered for their skins. These animals are viewed as nothing more than a commodity by those who raise and kill them. Joss, a Grammy Award winner, refuses to support an industry based on such cruelty and hopes you make the same choice by opting for cruelty-free fashion.

Synthetic fake snake, mock croc, and vegan leathers are a few of the realistic and luxe-looking materials that can help you achieve a great style—without wearing someone else’s skin.