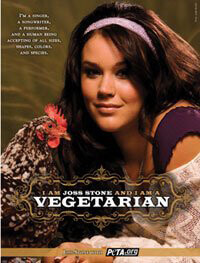 When Joss Stone burst onto the music scene, she blew everyone away with her powerful, soulful voice—a voice that Interview magazine has said “can sting like aged bourbon, or melt like strap molasses.” Belting out songs with a force unlike anyone else in her generation, Joss has sold millions of albums, been nominated for multiple Grammy Awards, and made fans of all ages across the globe.

Keeping with the theme of her album Introducing Joss Stone, PETA would like to introduce the world to a side of Joss that many of her fans may not know about: her lifelong vegetarianism.

Joss has never eaten an animal, and as a child, she used to sing “Amazing Grace” to the cows in the field. Says Joss, “I’m a singer, a songwriter, a performer, and a human being accepting of all sizes, shapes, colors, and species.” She adds, “I was born a vegetarian. I wanted to do the shoot because I feel there is no need to cause another living thing pain or harm. There are so many other things we can eat. I have never eaten meat in my life, and I’m 5-foot-10 and not exactly wasting away. A wise man once said, ‘Animals are my friends, and I’m not in the habit of eating my friends.’ That is exactly how I feel.”

Joss is wise to count chickens as her friends. Many people don’t know that these birds are inquisitive, sensitive animals who in some ways are as intelligent as mammals such as cats, dogs, and even some primates. But the more than 9 billion chickens raised in factory farms each year in the U.S. are forced into miserable lives, deprived of basic needs such as space and fresh air.

Join Joss in helping animals … by eating scrumptious, healthy vegan food! Take PETA’s Pledge to Be Vegan for 30 Days, and we’ll e-mail you our tips on the best places to eat, our favorite recipes, the tastiest animal-friendly snacks, and the most delicious vegetarian convenience food.

Interested in what other celebrities, such as Paul McCartney and Alicia Silverstone, have to say about vegetarianism? Check out PETA’s veggie testimonial site.