One thing is for sure: Jenna Jameson knows the importance of birth control—animal birth control (ABC), that is. That’s why Jenna posed nude alongside the tagline “Sometimes Too Much Sex Can Be a Bad Thing” in PETA’s latest ABC ad. 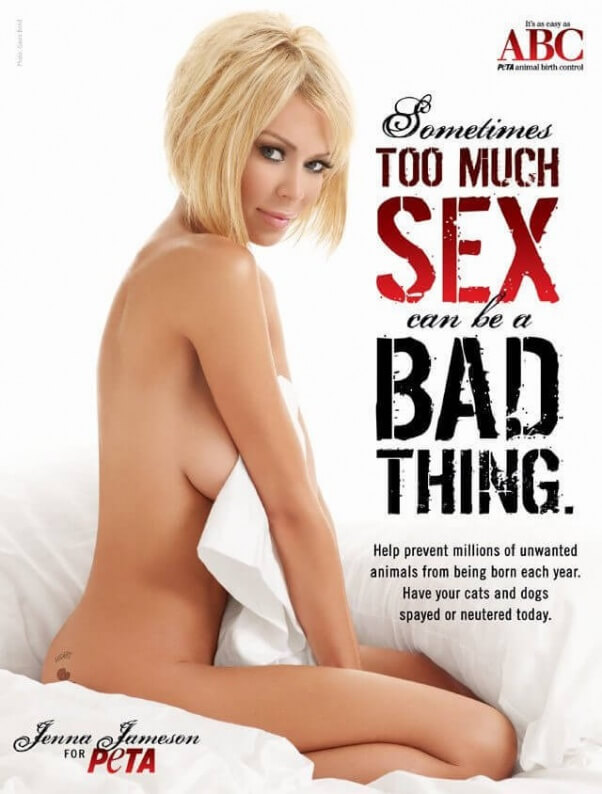 Every year, more than 6 million dogs and cats are abandoned at animal shelters in the U.S., and the shelters are forced to euthanize almost half of these animals for lack of good homes. The good news is that you can help as Jenna has—and you don’t even have to take your clothes off! It’s as easy as ABC: animal birth control.

What is animal birth control? It means always spaying or neutering your companion animals and never buying from a breeder or pet store. If everyone took these small steps, we could put an end to the companion animal overpopulation crisis.

“Until dogs and cats can go on the pill or wear condoms, we need to help them practice safe sex—by spaying and neutering,”  says Jenna. “Millions of homeless animals are turned in to shelters every year because there simply aren’t enough good homes for them all. The answer is as easy as ABC: Animal Birth Control, which means get your Fido or Fluffy fixed!”