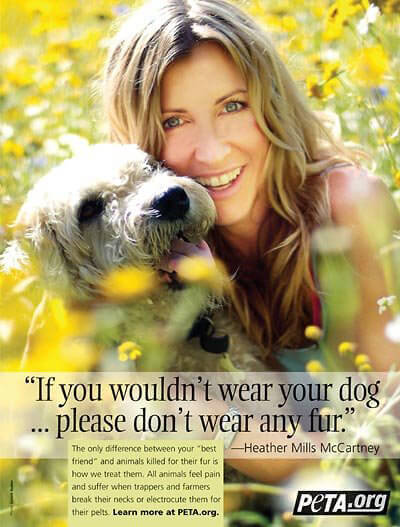 Heather Mills has issued a consumer alert about several top fashion brands whose fur garments may be made of dog and cat fur. At a news conference inside the New York Fashion Week tents, Mills screened a graphic video of animals in China being skinned alive for their pelts and unveiled her PETA ad campaign, “If You Wouldn’t Wear Your Dog, Please Don’t Wear Any Fur.”

Tommy Hilfiger, DKNY, and Sean John manufacture fur or fur-trimmed garments in China, whose fur industry has just eclipsed all other countries combined to become the world’s leading supplier of fur to the United States. Millions of foxes, raccoons, minks, rabbits—and, yes, dogs and cats—are killed in China in ways that would shock unsuspecting consumers because there is not a single animal protection law in the country.

“Consumers who find themselves favoring fur because it’s cheap are in for a shock when they find out that it’s at the expense of animals who are literally skinned alive,” says Mills. “Buying anything with fur supports one of the most gruesome industries on the planet.”

A year-long undercover investigation concluded earlier this year captured video footage of fur farmers in China swinging raccoons and foxes by their hind legs and smashing their heads into the ground—breaking the animals’ necks or backs but leaving them completely conscious, panting and blinking as they are skinned alive.

Raw fur pelts from China often move through international auctions where their origins can be mislabeled as other types of fur. Dog and cat fur is indistinguishable from that of other animals—only a DNA test can reveal its real source—so the best solution is to avoid wearing any fur.