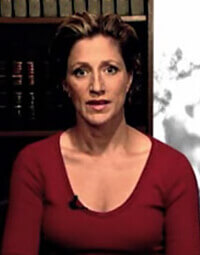 Actor Edie Falco is best known for her role as Carmela Soprano, the tough, devoted mom from HBO’s hit TV series The Sopranos. This talented actor showed a soft spot for animals when she took on the role of animal advocate and helped to spread the message about the link between animal abuse and domestic violence.

As Carmela, she was no stranger to the consequences of violence, and in real life, Edie knows that when humans abuse an animal companion, they are more likely to abuse another human.

Research in psychology and criminology shows that people who are cruel to animals don’t stop there—many of them move on to their fellow humans.

If you know of someone who has harmed an animal, report it to animal control or the police right away. The animals and the people in your community are depending on you. Help improve the lives of dogs and cats suffering from cruelty and neglect by supporting PETA’s work.

You can improve the lives of dogs and cats suffering from cruelty and neglect.