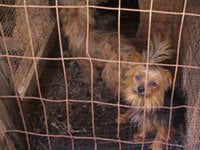 The pups in pet store displays are adorable—wriggling balls of fuzz just waiting to jump into customers’ arms. Store owners count on “love at first sight” because it pushes people to shell out hundreds of dollars to take cute puppies home. It should be a happy ending: The dog gets a home and the store turns a profit. But there is a dark side to the story.

As long as pet shops churn out puppies, unwanted dogs in animal shelters will be killed. And most pups sold in stores come from miserable “puppy mills” where mother dogs and “studs” spend lonely lives year after year in dismal cages, producing litter after litter like so many widgets on an assembly line.

Nearly 20 dogs were rescued from this sad existence when they were seized from a North Carolina man who was operating what appeared to be a puppy mill. A PETA representative gained temporary custody of the dogs, giving them the love they desperately needed and freedom from the narrow confines of their wire cages.

Don Scott of Maxton, North Carolina, was convicted of cruelty to animals after officials discovered that nearly 100 severely neglected dogs were languishing on his property. According to new sources, many of the dogs were covered with parasites and suffering from mange or eye infections and had been confined to feces-strewn, rusty pens.

The dogs, whom PETA cared for, were skittish and frightened by visitors—indicating that they were rarely, if ever, visited or touched by a caring human hand. They suffered from ear and eye problems and heartworm disease. They also showed signs of giardiasis, a diarrheal illness caused by protozoa in contaminated water, which is often found in puppy mills.

Of course, PETA treated the dogs and gave them the tender care they needed. We made sure they were not separated from their companions. Chihuahuas Rose, Sophia, and Fred enjoyed huddling together after their rescue. Dottie, a sweet Boston terrier, has joined a family with four other dogs and eventually, after some initial fearfulness, became a confident member of her “pack.”

Teddy is a Yorkshire terrier with an ulcer on his right eye. He is missing most of his teeth and suffers from a heart palpitation and a prostrate condition.

Blanche, a Shih Tzu whose right rear leg is deformed, has a very painful condition in her right ear. The condition requires medication and leaves her ear very sensitive.

The state of these dogs is a heartbreaking reminder of the terrible consequences of buying animals from pet shops and putting money in the pockets of unscrupulous breeders.

When you buy from a pet shop, you kill a pound pup. It’s that simple. Save a life instead. If you have the time and resources to care for a dog, adopt from an animal shelter.

Purchase supplies only from stores that don’t sell dogs, cats, fish, or other small animals or from online suppliers.

Urge pet stores to sell only supplies, not living animals. Ask them to team up with local animal shelters by displaying only animals who are up for adoption from the shelters. Until they do, let them know that you will only purchase supplies from stores that don’t sell live animals. Hand out information about puppy mills and the dog overpopulation crisis in front of your local pet store. PETA can provide posters and leaflets.

Sponsor a billboard in your area.

Check out PETA’s Animal Birth Control campaign for more information on what you can do to help dogs, cats, and other animals.