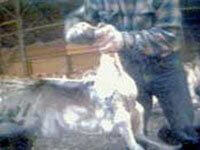 PETA conducted an undercover video investigation into Crestview Farm, a division of Willmar Poultry Company, which is based in Minnesota, the number one turkey-producing state in the U.S.

PETA’s investigation documented a farm manager who was strangling young birds and haphazardly bludgeoning dozens of others with what he calls his “killing stick.” A tape provided to the local prosecutor shows dozens of individual birds being bludgeoned—and many others, who were not seen on the tape, also suffered this abuse. Birds who did not die immediately were still thrown in the “dead pile,” where they were left to suffer slow and agonizing deaths as they lay among the bloody corpses of other birds.

PETA sent the video of the beatings and a formal complaint to the Kandiyohi County attorney’s office, but the turkey industry defended the farmer, arguing that such cruelty is a standard culling method for sick or weak birds. In an apparent attempt to show that the industry was interested in coming up with less horrific methods of killing sick birds, the National Turkey Federation pledged $25,000 for research into “humane, effective culling methods to be used on all turkey farms.” However, the group refuses to share its findings, and it is likely that turkey farms across the nation are still strangling sick turkeys or beating them to death.

Up to 300 million turkeys are killed every year for food in the United States. The one law that governs the treatment of farmed animals—the Humane Methods of Slaughter Act—excludes turkeys, chickens, and fish entirely, despite the fact that they account for 99 percent of the animals killed for food in the U.S. You can take a stand against cruelty to turkeys and all animals on factory farms by adopting a healthy and humane vegetarian diet. Request a free vegetarian starter kit and DVD to get started today.