Vegans, environmentalists, people with lactose intolerance (most of whom are people of color), and folks who prefer the taste of yummy plant-based milk to the stuff that comes from cows and is meant for their babies have been urging Starbucks to eliminate its vegan milk surcharge since the chain began offering nondairy options years ago. Starbucks dropped the surcharge on all its vegan milks in the U.K., and it already offers dairy-free options at no extra charge in China, India, and Vietnam. It’s time for Starbucks in the U.S. to catch up!

Check out some of the inspiring individuals who have joined PETA to help give Starbucks a wake-up call:

“My friends at PETA and I are calling on Starbucks to stop punishing kind and environmentally conscious customers for choosing plant milks. We all have a stake in the life-and-death matter of the climate catastrophe, and Starbucks should do its part by ending its vegan upcharge.” 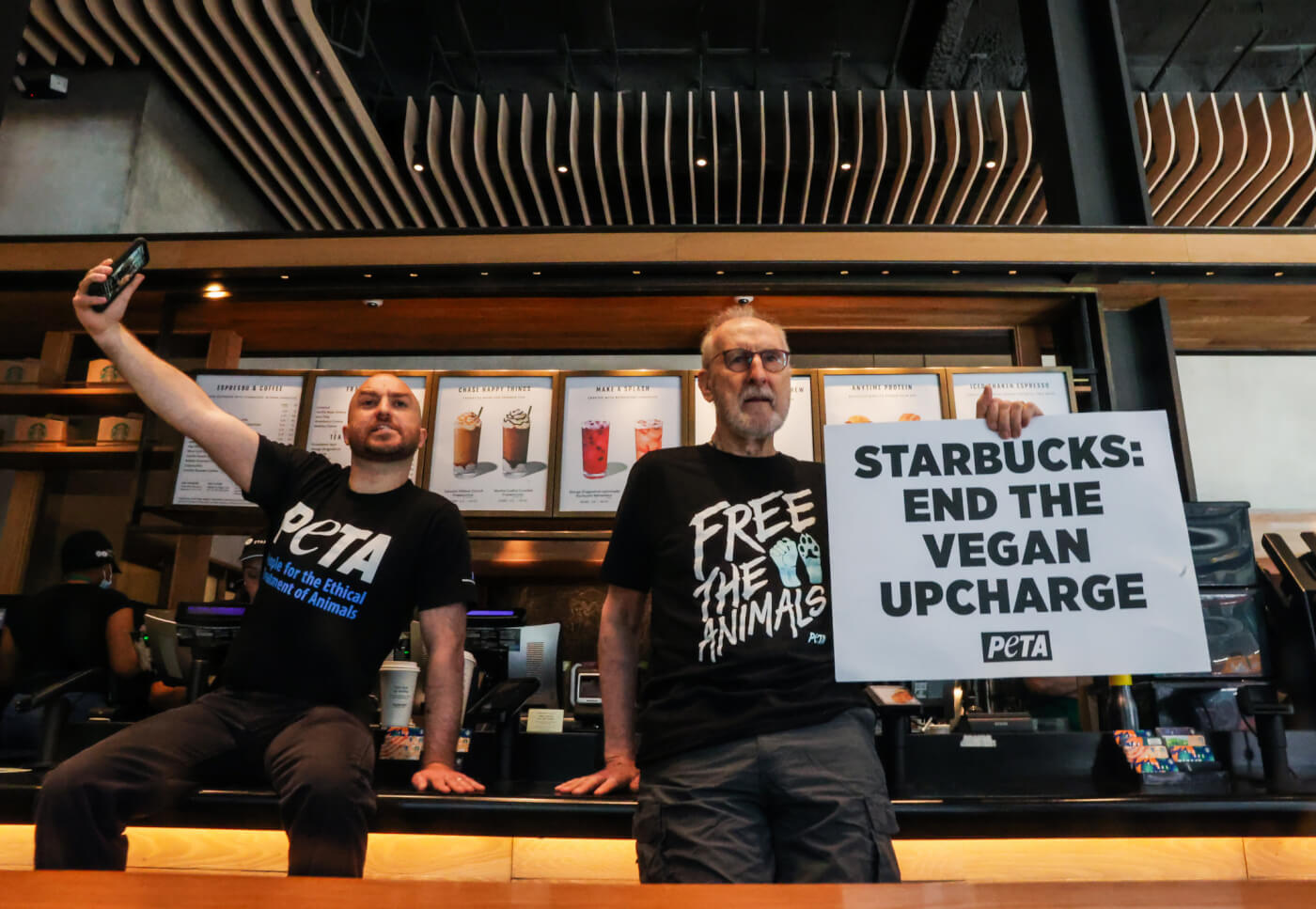 As Cromwell points out, the dairy industry is a major producer of the greenhouse gases that contribute to the climate catastrophe and is responsible for immense animal suffering. Cows used for dairy are artificially inseminated—workers insert an arm into the animals’ rectum and a metal rod to deliver semen into their vagina—and then sent to slaughter when their bodies give out.

Sir Paul McCartney asked the company to stop charging extra for nondairy milk. In a letter, the longtime PETA ally urged CEO Kevin Johnson to leave a parting gift for cows and the planet by arranging to end the chain’s vegan milk upcharge before he retired on April 4, 2022.

“My friends at PETA are campaigning for this,” writes McCartney. “I sincerely hope that for the future of the planet and animal welfare you are able to implement this policy.”

He points out that numerous chains (including Philz Coffee, Panera Bread, and Pret A Manger) offer dairy-free milk at no extra charge—and that even Starbucks in the U.K. dropped its vegan milk surcharge. 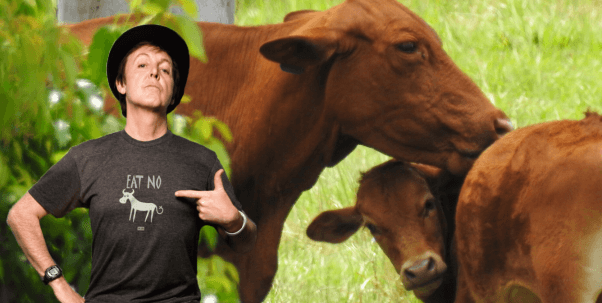 “As you make these changes, I’d like to point out that it’s been over a year since your company acknowledged that cow’s milk is its biggest source of carbon … yet you are still charging more for vegan milk.”

He also took time to mention that by charging extra for dairy-free milk, the chain is penalizing customers who are making the humane, environmentally friendly choice and those who are lactose intolerant—most of whom are people of color. 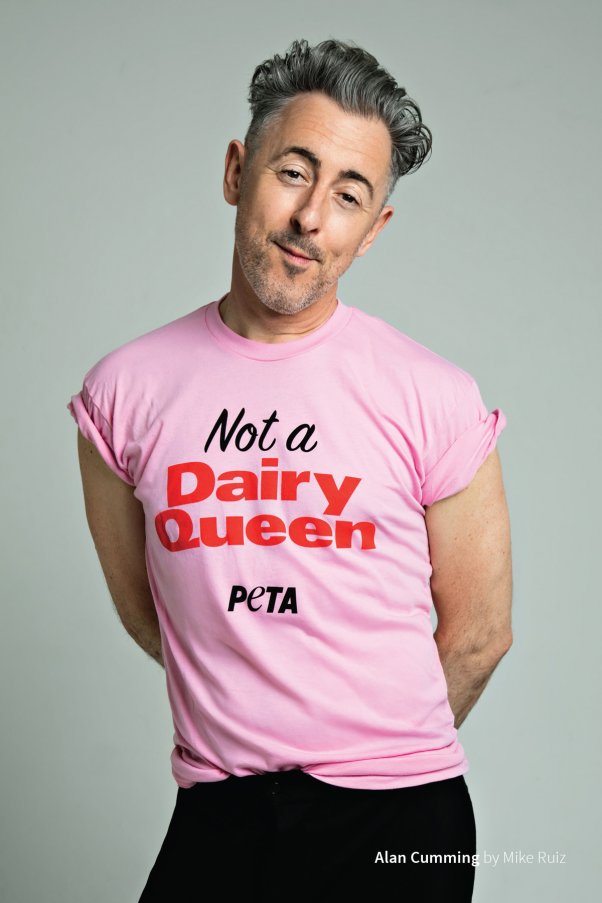 Alicia Silverstone, a PETA honorary director and a longtime animal advocate, represented PETA in the 2020 Starbucks annual meeting, asking, “When will Starbucks put its money where its mouth is and remove the barrier to customers choosing climate-, health-, and animal-friendly vegan options by dropping the surcharge on nondairy milk?”

Also!I'm always frustrated by extra charges for non-dairy milk. Y should we be penalized 4 making the eco-choice? It would be amazing for @Starbucks to lead the way &consider enviro externalities associated w the dairy industry by having dairy cost + or at least = plantmilk fees. 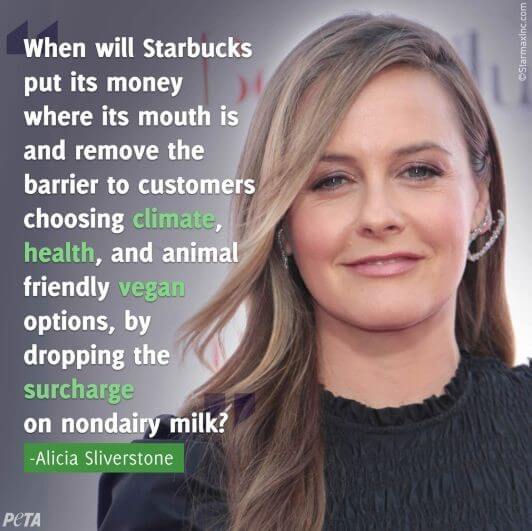 Celebs Are Calling Out Starbucks—and You Can Too!

Cows used for dairy are artificially inseminated (workers insert an arm into the rectum and a metal rod into the vagina), and calves are torn away from their loving mothers within a day of birth. According to the United Nations, animal agriculture is responsible for nearly a fifth of human-induced greenhouse-gas emissions and a global shift to vegan eating is vital if we are to combat the worst effects of the climate catastrophe.

Remind Starbucks that soy, oat, and nut milks shouldn’t cost a cent more than their dairy counterpart, which is cruel to cows, bad for the environment, and indigestible to many humans: