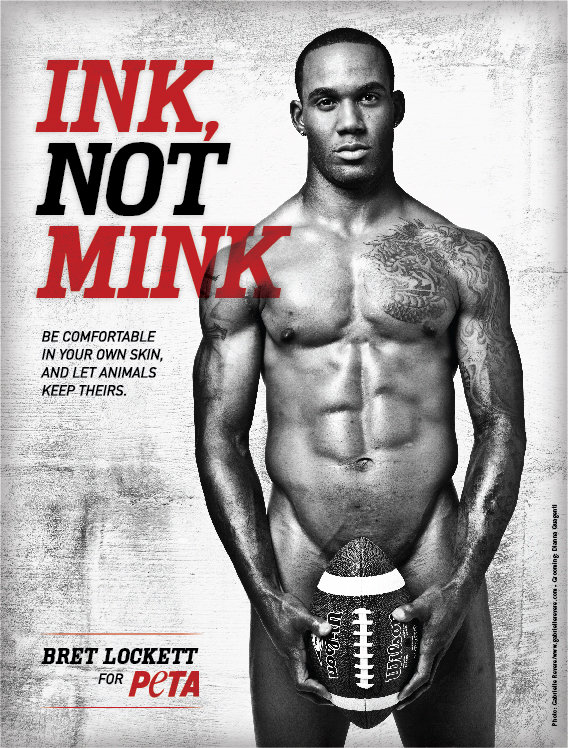 New York Jets safety Bret Lockett has taken time out from recovering from an injury to join many other male stars in PETA’s “Ink, Not Mink” ad series urging others to show off their unique skin and let animals keep theirs. Playing in New England, where winters are harsh, Lockett knows firsthand that there is no excuse—not even weather extremes—for wearing fur and that there are plenty of other fashionable, warm materials to wear that weren’t made by harming animals.

Bret challenges his fans to watch PETA’s undercover video footage of fur farms, just like he did, and wants everyone to know that for every fur coat, collar, or piece of trim, millions of foxes, minks, coyotes, rabbits, and even cats and dogs are violently bludgeoned, electrocuted, drowned, or strangled with wire nooses. Many of these animals are even skinned alive. In China, the world’s largest fur exporter, there are no penalties for this abuse. The only way to combat this cruelty is by never buying or wearing fur or fur trim.

In an exclusive behind-the-scenes video, Bret describes how he felt when her first saw what happens to animals who have their lives stolen from them in the name of fashion. “What really hurt me was when I saw that an animal was still able to move and lift its head up after it was completely skinned,” says Bret. “It brought tears to my eyes.”

You don’t have to take the field to join PETA’s campaign against fur—just sign this pledge to go fur-free.