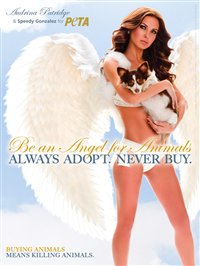 During the photo shoot, Audrina told us, “I wanted to get involved with PETA because I’ve always been passionate about animals, and I think this is a great way to make people and all my fans aware of all the animals that need a home. And a lot of people go to pet stores and breeders to buy their animals, but you should adopt, so go to an animal shelter and rescue a dog.”

Audrina knows that choosing to adopt from an animal shelter is the only way to ensure that a loving animal will not be killed because there simply aren’t enough good homes. While millions of animals must be killed for want of a good home, greedy breeders churn out millions of animals each year for pet stores to sell. You can help stop the cycle by joining Audrina and promoting animal birth control: always spaying and neutering and never buying from a pet store or a breeder. Over the years, Audrina has proved to be a great friend to animals.

Audrina and PETA want you to know that if you’re thinking about adding a dog or cat to your family, you should be sure to adopt from your local animal shelter-and never buy from a pet store or breeder.