Angela Simmons spreads the message “Eating Meat Is a Sin: Go Vegetarian” in her provocative ad for PETA, which she unveiled at The Paramount Hotel (see photos from the event). Angela—a devout Christian, the daughter of Rev. Run, and the star of the hit MTV shows Run’s House and Daddy’s Girls—was inspired by her uncle Russell Simmons to adopt a vegetarian diet. 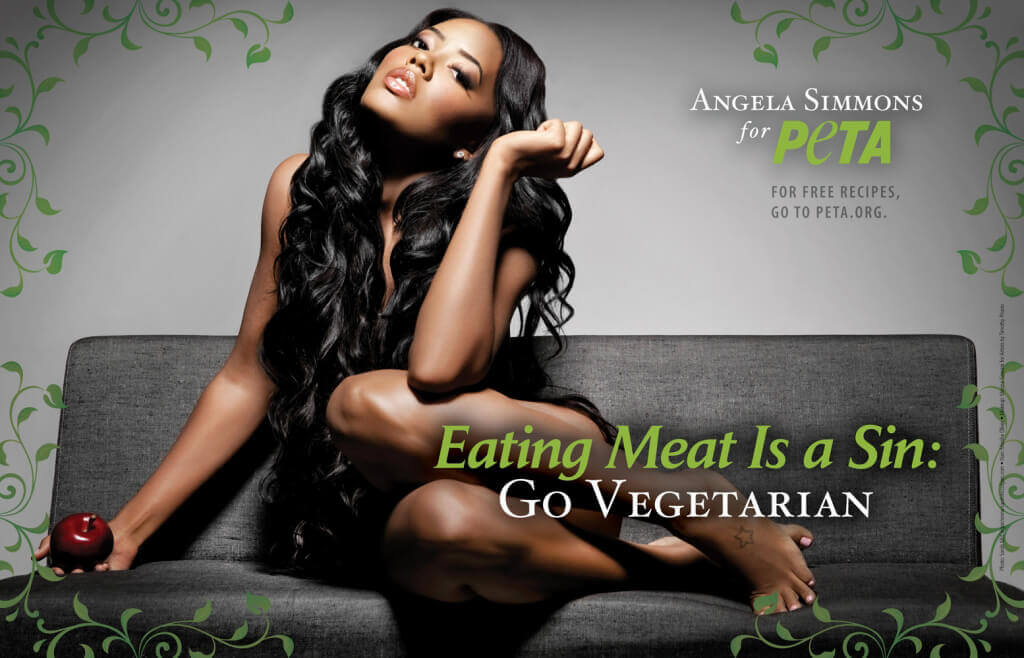 “I really want people to know what happens to animals … Animals have feelings, and I think it’s important we take action,” Angela explains. Angela believes that God’s creatures deserve love and compassion and wants to raise awareness about the billions of cows, pigs, chickens, and other animals suffering on factory farms.

Animals raised for food are crammed by the thousands into filthy sheds and confined to wire cages, gestation crates, or barren dirt lots without the opportunity to ever feel grass beneath their feet or sunshine on their backs. When they have grown large enough, animals on factory farms are crowded onto trucks and transported many miles through all weather extremes to the slaughterhouse, where they have their throats slit, are scalded alive, or have their bodies hacked apart “piece by piece,” as one meat inspector described.

About her vegetarian diet, Angela says, “I’m happy with it. I feel lighter—it’s a good feeling.” In addition to combating the cruelty of factory farming, adopting a vegetarian diet is the best thing that you can do for your health. Meat consumption has been linked to our nation’s biggest ailments, including heart disease, obesity, diabetes, strokes, and cancer. The American Dietetic Association states that vegetarian or vegan diets “are healthful, nutritionally adequate, and may provide health benefits in the prevention and treatment of certain diseases.”

Check out PETA’s free vegan starter kit and browse hundreds of free recipes to get your vegetarian diet going. Watch Angela’s on-camera interview from the set of her PETA photo shoot to learn more about why she chose to go vegetarian and for tips on how you can help animals.

Do something good for yourself and for animals. Join Angela and pledge to be vegan now!