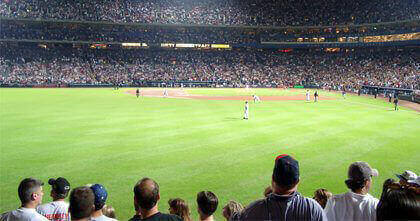 In addition to old standbys such as peanuts and popcorn, baseball fans are enjoying mouthwatering options such as fresh-grilled veggie dogs, veggie burgers, and faux chicken as well as hearty burritos, vegetable wraps, and tasty regional foods. Not only are these choices full of flavor, they’re also 100 percent cruelty- and cholesterol-free—talk about a triple play!

PETA is pleased to announce the Top 10 Vegetarian-Friendly Ballparks for 2009. (Be sure to check out PETA’s animal-friendly minor league counterparts too.) Click on each ballpark below to learn more about its vegetarian options. And the winners are …

Fortunately, these aren’t the only ballparks that have stepped up to the plate to serve delicious vegetarian options. Here’s a list of ballparks that received honorable mention and a rundown of the meat-free items on their menus!

Get started on your vegetarian diet today by ordering a free copy of PETA’s “Vegetarian Starter Kit.” It’s loaded with mouthwatering recipes and useful tips and information on going vegetarian. Order one now!

Thanks to Johanna McCloy and Soy Happy for their hard work in getting vegetarian items added to menus at ballparks nationwide!

Here’s a more detailed look at the ballparks that made our list:

1.      Citizens Bank Park (Philadelphia Phillies): The Phillies are the first-ever dynasty when it comes to delicious vegetarian fare. Now that they’ve added Southwestern black bean burgers and faux “crab cake” salads to an already stacked lineup that included veggie “steak” and veggie “chicken” sandwiches, veggie dogs, vegetable wraps, and various salads, we’ve noticed a connection between CBP’s vegetarian rankings and the team’s on-field success that tells us the Phils may well be on their way to another World Series crown.

8.      U.S. Cellular Field (Chicago White Sox): The south side of Chicago is the place to be for animal-friendly baseball fans this summer. White Sox fans can enjoy veggie dogs, Gardenburgers, vegetarian taco salads, corn off the cob, fresh fruit cups, and PB&J.

10.  (tie) Miller Park (Milwaukee Brewers): What better proof that an athlete can be kind to animals while still knocking the cover off the ball than Prince Fielder? Off to another solid season, Prince can enjoy delicious vegetarian options such as veggie dogs, vegetable wraps, fresh tossed salads, fresh fruit, made-to-order stir-fry, and baked potatoes at Miller Park concession stands.

10.  (tie) Wrigley Field (Chicago Cubs): After being plagued for years by an angry goat and a spurned black cat, the Cubs might finally get on the good side of the animal world with their first-ever appearance on PETA’s Vegetarian-Friendly Ballparks list. Vegetarian options at Wrigley field include Gardenburgers, black bean burgers, assorted salads, vegetable wraps, and a Healthy Kids meal (PB&J, juice box, and fruits and veggies).

Get started on your vegetarian diet today by ordering a free copy of PETA’s “Vegetarian Starter Kit.” It’s loaded with mouthwatering recipes and useful tips and information on going vegetarian. Order one now!