No, the title of this post isn’t ripped from the headlines of the Weekly World News. It happened in real life (or, rather, undeath), just a stone’s throw from PETA headquarters. This weekend, among the 1,700 participants and activists representing ZETZ—Zombies for the Ethical Treatment of Zombies—were several PETA folks in the first-ever “Survive Norfolk”—essentially a massive game of tag in which the living try to avoid being “zombified” by the living dead—to explain why going vegan is a no-brainer (sorry), and to hand out some “flesh-free recipes” (aka our vegan starter kits).

I’ll admit, zombies are pretty scary, but not nearly as horrifying as what meat does to animals, our health, and the planet. So listen to your favorite zombie jam while you sign our pledge to opt out of flesh-eating. Or try this outfit in your own parade or when you go out trick-or-treating: 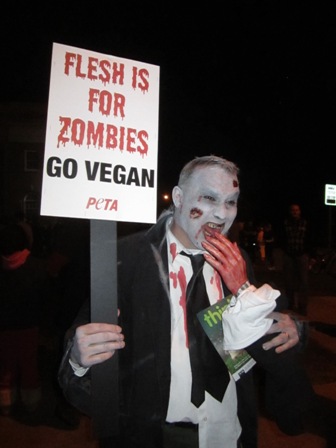