After learning from PETA that elephants who are forced to give rides at tourist attractions are often forcibly separated from their mothers, immobilized with tightly bound ropes, and gouged with nails or other sharp objects, Bellevue-based travel agency World Spree Travel committed to removing all elephant rides from its website. The agency now offers a jeep ride at India’s Amber Fort instead of an elephant ride.

“World Spree Travel is part of a global movement to reject tourist traps that imprison highly intelligent, social elephants and force them to give rides,” says Rachel Mathews, PETA Foundation’s associate director of captive animal law enforcement. “PETA urges kind tourists to steer clear of all captive-elephant attractions and to use travel agencies that have pledged to do the same.”

In Southeast Asia, up to half of elephants die during the grueling training, and those who survive spend the rest of their lives in servitude, lugging tourists around or performing tricks under the threat of being beaten with a bullhook (a weapon that resembles a fireplace poker with a metal hook on one end) or other sharp objects. 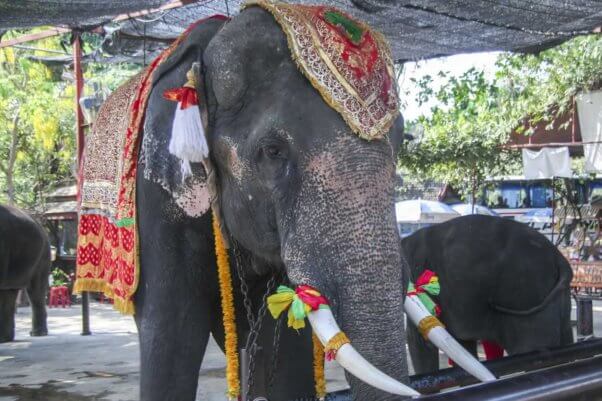 Elephant attractions are also dangerous to humans. More than a dozen tourists have been killed in Thailand in the past 15 years by elephants who have lashed out, and tuberculosis—a deadly disease that is transmissible from animals to humans—has been documented in captive Asian and African elephants.

World Spree Travel will receive a box of delicious elephant-shaped vegan chocolates from PETA. The agency joins Alexander+Roberts, Collette, Costco Travel, Tauck, TripAdvisor, and others in agreeing not to offer elephant rides.