A dog, a tall tree, and poison ivy made for a harrowing three days and nights for one Georgia family’s cat.

Butterfly is a 15-year-old tabby named for his sociable personality. But no matter how outgoing he is, he shouldn’t be outdoors on his own—which recently happened and nearly claimed all nine of his lives.

Normally, Butterfly stays indoors with his family, as all cats should—unless they’re strictly supervised while wearing a leash and harness. But one day this winter, he darted out the front door, and a dog (who should have been indoors, too) chased after him, causing the terrified cat to run up the nearest tree. He had climbed nearly three stories before he realized that he was too afraid to climb down. To make matters worse, he had crawled right into brambles surrounded by poison ivy. There he balanced, not having the nerve to descend and with nowhere else to go but up.

Butterfly’s family could hear his frantic cries, but they had no way to get him down. They mistakenly thought, as many people do, that cats always know how to get down from trees. After three days, they realized that his life was in danger and that he desperately needed help, so they called PETA.

We hired a contractor to scale the tree and rescue the terrified, dehydrated, and hungry cat. He was kind enough to film the rescue on his GoPro camera in order to show other people the dangers that cats face when they’re allowed to roam outdoors. 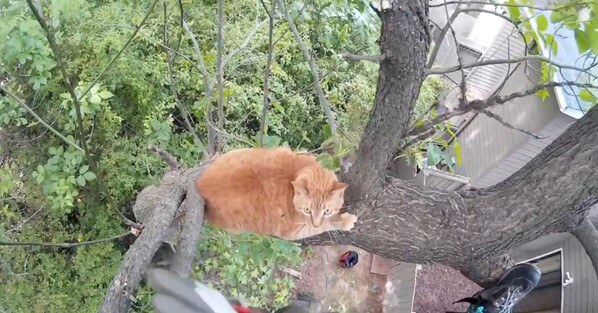 Cats aren’t equipped to fend for themselves outside. In addition to being attacked by other animals, getting stuck in trees, and coming into contact with poisonous plants, they may be harmed by cruel people, hit by cars, killed by poisons intended for wildlife, picked up by “bunchers” and sold to laboratories, and more.

Please, keep your cats indoors and only let them explore while supervised and wearing a safe cat harness.