I found this in The Oregonian this morning:

Schumacher Furs & Outerwear, after 111 years of business and one solid year of fervent animal-rights protests, is hanging it up in Portland. …

According to the article, Gregg Schumacher, who owned the place, was all whiney and sad about having to close down his store, but I have to admit I had trouble mustering up a whole lot of sympathy. As In Defense of Animals’ Matt Rossell put it,

“I’m sure he’ll try to present himself as a victim, as he always does. … The reality, though, is the animals are the victims, not Gregg Schumacher.”

In related news, there have been some monumental strides against fur recently in the cartoon world. Forbes just released a survey of cartoon villains and found that Cruella de Vil has had a sharp dropoff in popularity “as demand for fur coats plummeted.” And in last week’s Simpsons episode, animal rights crusader Lisa Simpson became a PETA member and doused Krusty with a can of red paint. It has to be admitted that victories in the cartoon world aren’t exactly PETA’s primary goal, but they’re nice all the same. 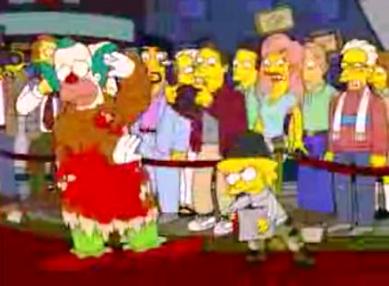